As an apartment building in Georgia quickly filled with smoke, a desperate mother on the second story knew that time was running out; to save her babies, she’d have to toss them out the window. Thankfully, down below was a young hero – ten-year-old Zna Gresham – to catch the tiniest of her three young children. 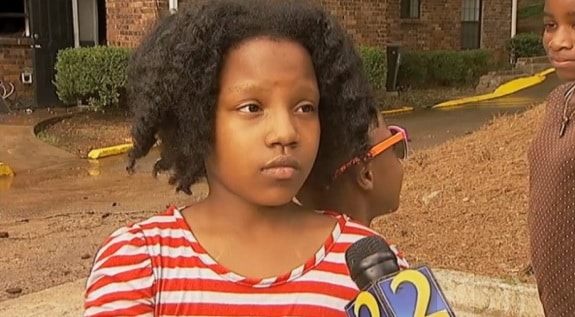 “The lady upstairs, she was dropping her babies,” Zna said in her interview with WSB-TV. “I caught the newborn baby from falling; before it hit the ground I had caught it.”

DeKalb County Fire Battalion Chief, Christopher Morrison, confirmed that the mother really didn’t have any other options. Reported to have possibly started in a first floor kitchen, the fire was filling the apartment with so much smoke that no one on the second floor could get out.

“The smoke was rising so quickly to the upper floors, they couldn’t make their way outside their upper apartment into the hallway because of the smoke,” Morrison told WSB Radio. “They just went to a window and they threw the child outside to the people, to the neighbors, down on the ground.”

Zna had been there to catch the baby, she says, because her aunt had held the door open for her and other relatives inside their apartment.

“My auntie, she was holding the front door, trying to get all of us. Then, when I was getting out, the lady upstairs, she was dropping her babies, and she asked me and my sisters can [we] get the babies for her,” Zna said. “I was thinking, ‘Oh no! It’s going to fall. It’s going to get hurt.”

Zna said she had a hard time understanding the mother because she speaks a different language, but she understood enough to come to the mother’s aide. Zna was able to catch the newborn, but the other two young children, ages 2 and 3, hit the ground. They sustained minor injuries from the fall, fire officials told WSB.

But the young girl didn’t take all the credit. Zna believes that everyone made it out safely because everyone worked together.

“In our family, we take care of our neighbors, no matter what,” Zna said. “I thank my auntie for holding the door for me…It took all of my family to help get the babies out…I feel very happy because, it’s like, I’m the hero and I felt good because I helped a baby.”

There were no deaths, and only two people sustained injuries from the fire itself. Zna’s grandmother was apparently was one of two injured in the fire, and has hospitalized, but she is expected to survive.

“My grandma, she was in the kitchen, and she was getting burnt on the back, trying to get out of the kitchen,” Zna said. “She went to the hospital today, and we know she’s going to be okay.”