Tiarna Middleton is almost two weeks old and her mom is still waiting to lift her up in her arms. The baby girl born with a rare heart condition is waiting for a transplant and she became the youngest person in the world yesterday to be given an artificial heart till there is a donor.

Weighing 5lb 8oz Tiarna was born with her vital coronary artery missing, and the right side of her heart had not developed at all. 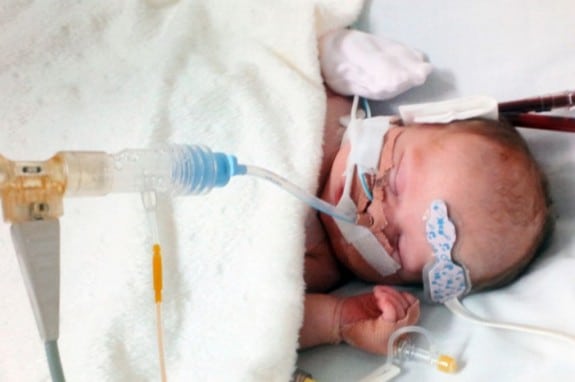 When her parents Sharney Gray, 22, and Gary Middleton, 25 launched an appeal to encourage people to register themselves as organ donors, the baby girl became both the youngest and the smallest baby in UK in need of a transplant.

Without a donor, doctors had little choice but to fit a ‘berlin heart’ in her tiny chest. The procedure was a medical first on a 13 day old and was conducted during a delicate ten-hour operation at the Freeman Hospital in Newcastle.

‘We have been on a total emotional rollercoaster and are taking each day as it comes. Tiarna is doing well in the circumstances.’

In order to give her a fighting chance, the baby was initially kept alive by an ECMO machine that takes over the role of a heart by putting oxygen in the blood. Tiarna was born with an extremely rare condition called hypoplastic right heart syndrome, which meant she had a blocked heart valve in the artery going to the lungs.

But the machine is only suitable for a short term use. With the wait for a donor getting longer, doctors decided to give Tiarna a Berlin heart but of a relatively smaller size delivered from The Berlin Heart Company in Germany where it is made.

‘She’s the smallest person they’ve tried that on. She has nothing left to try so we hope this works. The doctors at the Freeman have done everything for her.’

The baby will need a donor heart of a three month old or younger.

A stay at home mom, Sharney has a two year old son Jamie and was made aware during pregnancy that her daughter had a rare heart condition. But she decided against abortion.

She says, ‘We knew it was a very serious and very rare condition but I could feel her kicking so I wasn’t going to get rid of her.’

It was during the baby’s birth that doctors realized that her coronary valve had not formed.

‘She was screaming for seven hours and we thought she was OK but then she started to have difficulty breathing and they had to perform CPR on her for 38 minutes,” said Sharney.

The artificial heart offers some hope and can be used for a year, but Richard Kirk, consultant paediatric cardiologist and transplant physician at the Freeman Hospital, explained that was not ideal as the baby has to remain in hospital.

Dr Richard Kirk said, ‘We need to find a donor for her to go home and live a healthy and normal life.’

The mom makes an emotional appeal,

‘Now we are just hoping someone will provide her with a heart, someone could save her life. We’re in a really difficult position. Babies under two months can’t be organ donors in this country. She could take the heart of a baby up to three months old but it all depends on weight and size. Time is just running out.’

‘I haven’t even held her, all I’ve been able to do is hold her hand. It is really frustrating. I can touch her but not pick her up.’