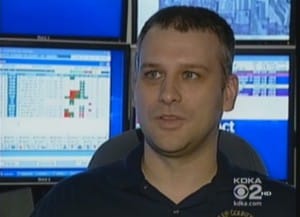 When dispatcher Shawn Pistorius in Pennsylvania received a call from a woman who said she was in labor, he did not realize that it would be the woman’s 13 year old son who would later help his mother with the delivery. But the young teenager remained absolutely calm, while helping bring his sibling into the world.

Shawn received a call from a woman who said she was from Butler, Pa., at around 7.00 am in the morning.

“She had told me she didn’t know she was pregnant, but she thought she was having a baby,” said Shawn.

The call got disconnected and when Shawn re-dialled the number it was picked by the woman’s 13 year old son.

“When I called back, I said, ‘How’s mom doing?’ And he said the head was showing on the baby,” said Pistorius.

He then began giving the boy instructions as to how to assist his mom deliver. The boy listened intently and remained calm as he followed the procedure. Shawn could hear the mother screaming in the background as the young boy asked her to lie down and brought blankets.

“He did a really good job. He was very calm and got his mother to lay down, and he went and got blankets to wrap the baby in, and by the time he was back to mom, the baby was out,” said Pistorius.

The baby was out in just five minutes and the dispatcher feels all the credit for the smooth delivery goes to the cool and confident boy.

“He’s actually the real hero in this. I just was giving him, you know, telling him what to do, and he did it all,” said Pistorius.

The mother and baby, a girl, are said to be doing well. – Atula, Staff Writer