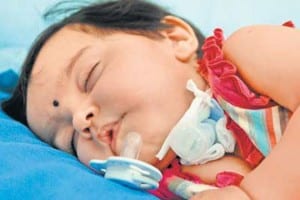 From the moment Ria was born, her parents faced one grave news after another when doctors revealed that the baby suffered from many organ and genetic disorders. But while her parents coped with the news, the biggest fighter turned out to be the baby girl who by the age of 14 months survived 16 complicated surgeries and was on a ventilator since her birth.

Ria was born in Dubai to Delna Dhamodiwalla on 21st February 2010. In her eighth month of pregnancy Delna experienced bleeding and only then came to know that she was carrying twins. Although the second embryo failed to grow, Delna gave birth to Ria under complicated conditions.

“In the eight month of my pregnancy, I learnt about my twin pregnancy. By then the second embryo had been discarded naturally by my system. My hopes were pinned on Ria,” recalls Delna.

But minutes after birth Ria had difficulty breathing and doctors decided to closely monitor her at the Paediatric Intensive care unit of the Dubai hospital. Soon it was found out that Ria was suffering from a congenital defect, termed TEF (Tracheo-Esophageal Fistula).

The condition affects one in 8,000 babies when the food pipe remains attached to the lungs and the wind pipe at many different points. Doctors asked the family to shift Ria to Al Wasal Hospital where the complicated surgery could be performed.

“My husband withheld all the details about the severity of her condition, as I was still recovering from my delivery. He thought that one surgery was all it would take. But destiny had made different plans for us,” said Delna.

The surgery was successful but the troubles for the baby were far from over. When Ria’s irregular breathing returned she was put on ventilator support and further investigation revealed that she had another congenital anomaly, Laryngo-Tracheo- Oesophageal Cleft Type 2 (LTEC-2). It is a rare gentical disorder that affects one in 20,000 infants.

Dubai doctors then advised the family to move to another country like India, Switzerland or USA where medical facilities were advanced and could offer better care for the baby.

After much thought the family decided to travel to India and let Ria get her treatment at Mumbai’s Lilavati hospital. On 17 April she was flown on ventilator support from Dubai to Mumbai, but again, there were no Paediatric ambulance available to carry the baby.

“I didn’t want to take any chances. I scouted around for a pediatric medical ambulance, and was surprised that Mumbai didn’t have many. I finally managed to find one with most of the necessary medical equipment, and after great ado, managed to have it brought to the door of the aircraft. The ambulance conveyed Ria to Lilavati Hospital. Ria’s condition had worsened by the time the ambulance reached Bandra, since the ambulance lacked several key equipment,” said Delna.

Thankfully though after meeting the doctor in charge Dr Santosh Karmarkar, the family found a man they could trust.

“CLEFT repair is a very challenging surgery for any doctor. After performing the surgery, we kept our fingers crossed. Thankfully, she recovered fast. It was then that I knew that the girl is a fighter,” said Dr Karmarkar.

Hope still remained afar because at Mumbai, doctors again found that Ria was suffering from two heart congenital anomalies. She was diagnosed with an Atrial Septal Defect (ASD), an 11-mm hole in the heart, in addition to Patent Ductus Arteriosus (PDA), a condition in which the blood vessel ‘ductus arteriosus’ fails to close normally, leading to erratic blood flow. Doctors also found that the baby was repeatedly getting fungal infections affecting her liver, spleen, kidneys and lungs.

Ria’s ICU intensivist Dr Uma Ali, said, “She was not responding to the usual drugs. We decided to administer a newly introduced drug in the market, to which she responded well. We had been trying to gradually reduce her dependence on the ventilator, and started succeeding. The first time she was taken off the ventilator for three hours, everyone was beaming with joy.”

For the baby though it was like spending the first year of her life in a hospital was just a normal part of life. Her mother recalls how Ria befriended all the medics who took care of her.

“In her fourteen-month long stay at Lilavati, Ria has befriended all the 16 doctors who are involved in her treatment. On her first birthday, (21 February, 2011) the nurses pooled in their resources for a gift of gold earrings for the little one. Another gifted her a dress, and Dr Karmarkar came to check up on her armed with a cake. Such was the popularity of the pint-sized patient, that she cut eight cakes in the hospital’s PICU,” said Delna.

When the baby could not breather on her own, again on May 25th Dr Suresh Joshi performed a PDA closure surgery. Post this surgery her condition seemed better and she could be removed from the ventilator for longer durations. It was then that doctors decided to close the hole in her tiny heart.

“The vessels were so tiny that the doctors had a hard time detecting them, leave alone operating on them. After many failed attempts, they finally succeeded,” said Delna.

But even before the family could breathe a sigh of relief post the heart surgery, doctor Karmakar came with the news that complications due to the CLEFT surgery had again occurred.

“Every time we diagnosed a new hurdle, I had to summon up immense courage to go and break the dreadful news to the parents.”said the doctor.

They again found an attachment between the windpipe and the food pipe in the lower side of the neck and whisked Ria to the operating room hoping this would be the last time. But even after that surgery Ria needed 5 more to completely separate her food pipe and wind pipe and gain strength to breathe on her own.

Finally after enduring 16 critical surgeries and perhaps becoming the longest ever staying infant at the hospital Ria was released on May 17th this year.

“One year and two months old, she entered her own home for the first time. She is put on ventilator for only three hours each day. Soon she will be able to breath independently. I always knew she would make it. My faith has paid off,” said an emotional Delna, who plans to start a foundation to help similar patients. “I will name it Rian, after Ria and my son Zeedan. Though the two have met only thrice till now, they share a special bond.”

Her father Jamshed had returned to Dubai to look after their son Zeedan and his schooling. He works in a multinational Bank and has already spent Rs. 60 Lakh (Approx. 130 thousand US dollars) on Ria’s treatment. But the family feels it is not the money but the fighter spirit of the baby, courage and hope that saved their precious daughter.