Little Jaya Maharaj had barely opened her eyes to see the world when doctors whisked her to the operating room to fit her for a pacemaker. At 15 minutes old, she became one of the smallest recipients for her ailing heart. 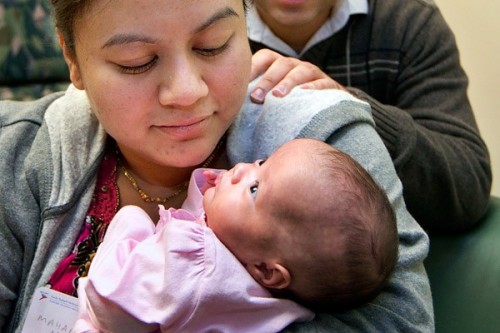 Doctors at Stanford University’s Lucile Packard Children’s Hospital knew they had to race against time to save Jaya. The baby girl was born nine weeks early and had only hours to live without the life saving device.

26 year old Leanne Maharaj and her husband 31 year old Kamneel Maharaj were told during a routine prenatal visit that their baby’s heart rate was dangerously low. She had a congenital heart block where a mother’s immune system accidentally attacks the nerve fibers of the fetus that help the heart to beat.

The pair was told that the baby would have to be delivered as early as possible and then immediately operated upon to save her. The parents waited for the baby girl to grow as strong as possible before this surgery.

“We were worried, but at the same time we were hopeful that she was fighting inside and doing the best she can,” said Kamneel Maharaj, an information technology manager at Silicon Valley.

What was critical to saving her was to decide the exact moment of delivery, says Dr. Valerie Chock, the neonatologist who counseled the couple. The fetus should be delivered as soon as possible but also be given time to develop organs well that help her survive outside the womb.

“Unfortunately, a lot of babies in this position don’t even survive childbirth,” Chock said.

It was then decided that Baby Jaya be born at 31 weeks. A team of 20 medical staff helped deliver an otherwise healthy 3.5 pound baby. But her heart beat was incredibly slow and surgeons decided to operate upon her immediately.

He said, “”The only way to save this baby was to deliver the baby right away and then the pacemaker,”

He also noted that usually surgeons performed two surgeries instead of one. The first one involved connecting wires of the pacemaker outside the body and in the second one a permanent device was installed.

But in Jaya’s case the more complicated procedure of attaching the permanent device inside the body was done to avoid another surgery. The current pacemaker would last 10 years according to the doctors.

Dr. Michael Artman, the chief pediatrician at Children’s Mercy Hospital in Kansas City, Mo., and a neonatal cardiologist was all praises for the surgeons.

“What really distinguishes this is just the fragility of this premature baby and the condition in which this baby was born.” he said.

He added that while the surgery itself was routine it was challenging because of the tiny baby involved and the coordination needed of the entire team.

Jaya means victorious in Hindi and her parents think she proved to be just that.

“Whenever we were worried, she would kick from inside and say, ‘I’m here; I’m alive!'” Kamneel Maharaj said. “We thought maybe she was trying to tell us that everything was OK, so we were always hopeful.”

The baby girl is three months old now and weighs more than 8 pounds.