Statistics from the Centers for Disease Control and Prevention indicate that approximately 1 in 10 infants are born prematurely. Sadly, not all of them survive. In fact, science and most doctors continue to stand by the non-resuscitation of most infants born before 22 weeks’ gestation, due to the low rate of survival and high risk of serious complications. Yet there is a child out there – a little girl, now 3-years-old – who proves that miracles are still possible. 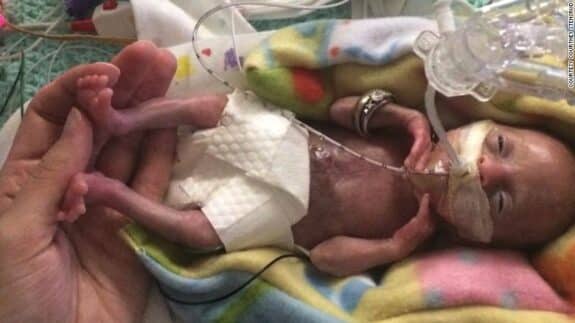 Born at 21 weeks, four days’ gestation, the little girl wasn’t supposed to survive. She wasn’t even supposed to be resuscitated. But as Courtney Stensrud held the 15-ounce baby in her arms, the umbilical cord still attached, listening to the doctor describe her daughter’s prognosis, she couldn’t help but hold onto hope.

“Although I was listening to him, I just felt something inside of me say, ‘Just have hope and have faith.’ It didn’t matter to me that she was 21 weeks and four days. I didn’t care,” Stensrud said. “As he was talking to me, I just said, ‘Will you try?’”

The physician, Dr. Kaashif Ahmad, a MEDNAX-affiliated neonatologist and author of a study on premature birth, resuscitation, and the potential outcomes, hadn’t planned on reviving the infant – he may not have even believed it would work – but he did it anyway.

“When the mother asked that we do everything for her daughter, despite having no reason to believe the baby would survive, I just made the decision to proceed with a vigorous resuscitation,” Ahmad said. “So we placed her under an overhead warmer, we listened, and we heard her heart rate, which we were not necessarily expecting.”

That was about the time that things started to change – and when Ahmad realized that this infant just might survive. He and the medical team placed a breathing tube in the infant’s airway, delivered oxygen, and watched her perk up.

“We started giving her oxygen, and really pretty quickly, her heart rate began to rise,” Ahmad said. “She very slowly changed colors from blue to pink, and she actually began to move and began to start breathing within a few minutes.”

Now, two years later, the girl is keeping up with her peers. She’s a little smaller than most of them, and she tested at about 20 months on the Bayley III tests (a performance test used up to age 3 to assess a child’s cognitive, motor, and language abilities). However, when you factor in her actual due date, she’s right where she should be in terms of development.

“She was at that time 24 months, but as we noted in the case, if you take into account how many weeks early she was, she was actually about 20 months, corrected,” Ahmad said.

Still, her outcome is not typical, and Dr. Ahmad cautions parents against being overly optimistic in very early births. After all, there are many factors that could have influenced the girl’s medical outcome. For example, Dr. Noelle Younge, assistant professor of pediatrics at Duke University School of Medicine, who was not involved in the case report, indicated that the ultrasound could have been off by a few days, which would have placed the girl closer to 22 weeks’ gestation and, in turn, increased her odds of survival.

“Except in the case of assisted reproductive technology, there is always uncertainty about gestational age dating,” Younge said. “First-trimester ultrasounds are generally thought to be accurate within five to seven days, so it is possible the infant may have been 22 weeks of gestation at birth . . . As neonatal and obstetric care improve over time and a greater number of infants are actively treated at 22 weeks of gestation, there are likely to be more cases of infants who survive with favorable outcomes, but unfortunately, the majority of infants born this early do not survive.”

Still, Courtney hopes the story of her daughter encourages other expectant mothers – particularly those that may be at risk for going into preterm labor.