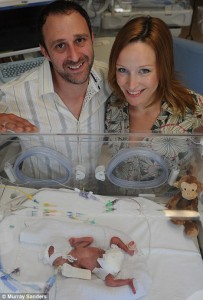 A set of 23 week twins are showing the world and UK lawmakers that survival is possible before the viability threshold of 24 weeks gestation.

When Amanda Staplehurst went to the hospital at twenty-three weeks gestation she thought she had a stomach bug, but decided to play it safe. To her surprise she was in full labor and nothing could be done to stop it. Her daughter Amelia Hope was born two hours later with no signs of life, weighing only 1 pound 4 ounces. The tiny baby girl was immediately whisked away to the hospitals Neonatal Intensive Care Unit.

Two amazing things happened after baby Amelia was taken to the NICU. First, doctors decided to revive her despite the fact she was born before the 24-week abortion limit guidelines. Second, her brother Arthur, who was breech, decided he was not quite ready to be born. Amanda continued her pregnancy with Arthur for ten more days before he was delivered by caesarean section weighing an ounce more than his little “big” sister. Both babies are doing well, and Amanda and her fiancé Lee hope they will be able to begin cuddling in a joint incubator very soon. 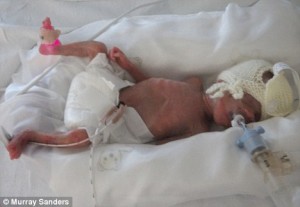 Twins being born a week apart is nearly as rare as twins being revived at 23-weeks gestation in the United Kingdom. As we covered last week with the story of Alexis Brown, most babies born before the legal abortion limit are not considered to have a chance of survival, thus allowing doctors to refuse reviving or intervening to save their lives.

There is hope that these two miracle twins will help further two worthwhile causes in England. First, that all micro-preemies will be given the same chance at life that Amelia Hope was lucky enough to receive, but also that the government will lower the legal abortion laws to 20 weeks. Currently, women may abort their pregnancies up to twenty-four weeks gestation. – Jill, Staff Writer

[ed note – In North America babies are evaluated on a case by case basis.  While there is a 24 week rule in some hospitals, many of these little fighters have been resuscitated well before that and gone on to be amazing children.]