Home » 23 Weeker Shocks Everyone By Coming Back To Life

UPDATE: This little fighter passed away this morning just 24 hours after being found alive. The baby’s mom was quoted as say:

“The doctors told us she lost her pulse again this morning. We were both next to her and you could she was really gone this time. You can’t imagine what we’re going through.”

“The medical team did everything in its power to save this baby, but unfortunately, a premature baby in the 23-week-old pregnancy has very little chance of surviving” 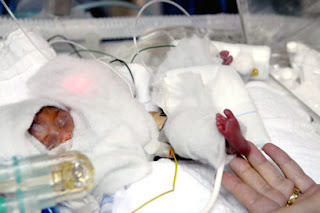 Originally posted: Since starting this website, I feel like I have covered this same story many times. Micro-preemies are such amazing little fighters!

Medical staff at Nahariya hospital were stunned after premature baby showed vital signs five hours after being pronounced dead, while being kept in the hospital cryolab.

The baby’s mother arrived at the hospital a few days before the baby’s birth for a series of prenatal tests.

The tests showed that she was experiencing some intrauterine bleeding and that her fetus had no pulse. This is when doctors scheduled a second-trimester termination procedure.

Once the procedure was completed, the medical staff followed protocol and verified that the 23 weeker was not breathing, subsequently pronouncing her dead.

The baby was then transferred to the hospital cryogenic laboratory (cryolab), before being sent on to the pathology lab for a battery of routine postmortem tests, meant to give the doctors and her parents more answers as to the cause of her death.

The baby had spent five hours inside the cryolab’s cooler when her father, accompanied by the medical staff, asked to see the body.

Upon opening the cooler, the baby began showing signs of spontaneous breathing. She was rushed to the neonatal intensive care unit and placed in an incubator and on a respirator, to assist her breathing.

Doctor’s believe that it was the cold that kept the baby’s metabolism rate and use of oxygen low, adding that medical literature is familiar with case of children and adults who have “come back to life” after being seemingly frozen.