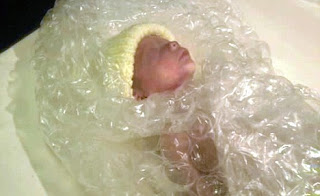 I am always amazed at the lengths that doctors will go to to keep a micro-preemie alive.

When Gregor Craig arrived at just 24 weeks weighing a tiny 1lb 14oz, he was so small that his father’s wedding ring fitted over his arm.

His chances of survival were slim, but doctors wanted to give him every chance.

So they wrapped him in the bubble wrap to keep him warm. Hospitals often use plastic wrap to help premature babies retain their body heat, but this was the first time the doctors in Kintyre, western Scotland, had used the bubble variety.

At just 24 weeks gestation Gregor’s mom began suffering severe stomach pain. Doctors found that her she was suffering from a urinary tract infection that triggered labor and they couldn’t stop the baby from arriving.

After he arrived, doctors only gave Gregor a 10 per cent chance of survival.

After spending 17 weeks in the special care nursery, this little fighter has persevered through many set backs including laser eye surgery at ten weeks to stop him going blind as the blood vessels in his eyes hadn’t developed properly.

When Gregor reached 7lb, he was allowed home, even though he needs to still have daily oxygen, and his parents have had to learn how to resuscitate him if necessary.

Mrs Craig said: ‘He is now a happy six-month-old and incredibly all he seems to have is some slight hearing problems. It’s a small price to pay for having him here with us.’

While it is common to wrap babies this small in plastic wrap second after birth to maintain their body temperature, I am not sure what benefit the bubbles adds…

Every baby that arrives and survives at this gestation is a miracle. We wish this little fighter the best for the future.