Prayers and support from family, friends and even strangers have helped keep determined parents of an infant girl born at just 24 weeks gestation strong through difficult times. The tiny baby weighed in at only 1 pound 6 ounces when she was born on September 13, 2015, and doctors agreed her chances for survival were grim. 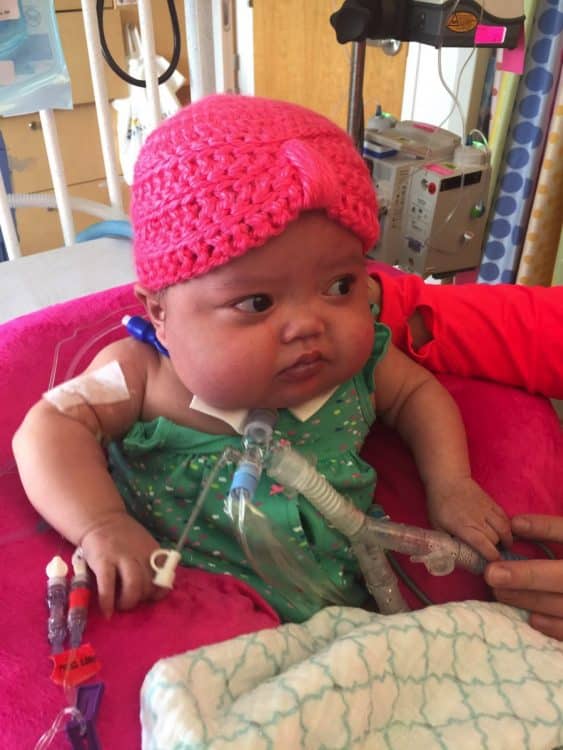 Even before Zariah Donovan was born, parents Shawn Donovan and Vilayvone Thipsouvan faced some difficult decisions.

Hospitals in their area were turning them away, knowing they were unable to supply the life support that would be necessary for an infant so small. It took an emergency ambulance ride coupled with a Life Flight to get the family to a hospital willing to do the delivery. In those critical first months of her life, baby Zariah was cared for at Primary Children’s Hospital where she was on life support due to a severe case of chronic lung disease.

From open heart surgery to a collapsed lung and three bouts of pneumonia, baby Zariah has fought through many medical setbacks.

As late as this summer, hospital physicians still estimated Zariah’s survival chances at zero, but her parents refused to accept that prognosis. They found Nationwide Children’s Hospital in Columbus, Ohio, and got their daughter into a special treatment program.

The attending physician on their case, Dr. Daniel Malleski, worked with the doctors at Primary Children’s to prepare the baby for transfer.

Now 11 months old, Zariah and her father are in Ohio where the baby continues treatment and is defying the odds against her. Mom is the policy holder for the family’s insurance so is required to remain in Utah and continue working in order to keep the medical insurance intact. With so many expenses to cover, a Go Fund Me site has been set up to help the family out. Contributions are being taken at gofundme.com/27eww78w.

Because of the medical crisis, the couple’s wedding plans were temporarily put on hold. They were finally able to marry in a simple, impromptu ceremony that took place at Primary Children’s Medical Center. The couple was joined by 20 members of their friends, family, and hospital staff who have provided emotional support to the couple.

Since transferring hospitals, Zariah’s chances of survival has skyrocketed to 96 percent. More than 340 days into her NICU journey, she will need to be in the special care nursery for a very long time, but doctors are confident she will ‘walk out of their facility a healthy toddler.’

For now, her family continues to provide love and support, while praying they will be under the same roof soon.