A challenge, spearheaded by Stanford University’s Entrepreneurial Design for Extreme Affordability Program, has produced a sleeping bag incubator that could cause a dramatic decline in infant mortality throughout the developing world. 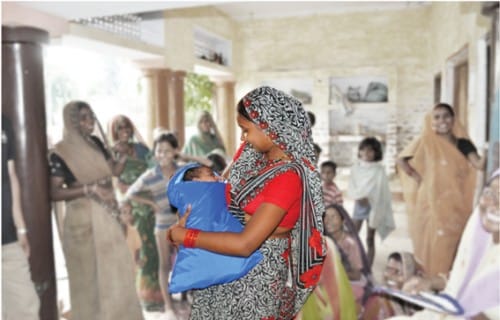 Around the globe, in rural communities and urban and suburban slums, the possibility of a baby dying in the first few months of life, is so looming and ominous that parents actually hesitate to name their children.  In rural India, parents wait a month before naming a newborn.  Other cultures wait even longer than that.

It will come as no surprise that the most likely casualties of infant mortality are premature babies and those born extremely underweight.  Without enough fat on their bodies, these infants are unable to regulate their body temperature and struggle with hypothermia.

Babies, who survive such a rocky start, often continue to face health problems throughout their lives.  The first month is critical to a baby’s growth and development.  If an infant’s energy is diverted from growth to the task of staving off hypothermia, his or her organs will not develop as they should.  This inhibited organ development can result in conditions like heart disease, diabetes and low I. Q.

For this reason, premature and low birth weight babies are placed in incubators that regulate their temperature for them.  This is only possible, however, if caregivers have access to a hospital environment that can supply an incubator.

Around the globe, four million babies die each year for the lack of an incubator.  With a price tag of 20 thousand dollars each, they are cost prohibitive.  They also require electricity to run, which in places like rural India, may simply be unavailable. 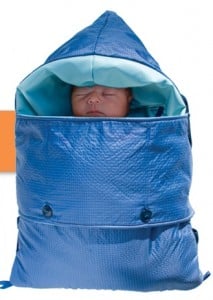 Through the Stanford Entrepreneurial Design for Extreme Affordability Program, Jane Chen and her team at Embrace were able to find a solution to the incubator issue that will be available to mothers, midwives and clinicians for only $25.  Their product is a sleeping bag and heated pouch which has been brilliantly designed to address and anticipate every issue that may arise.

The bag opens completely to help caregivers swaddle the baby.  It has no seams inside which makes the bag easy to sterilize, allowing one unit to help many babies.  The heating pouch contains a wax-like substance that is a phase-change material with a melting point of 37 ° C, – a healthy human body temperature.  The pouch is warmed through immersion in hot water, which bypasses the necessity for electricity.  Once warmed, the pouch is able to maintain a constant 37 ° C for four to six hours, at which point it is simply reheated.

The Embrace team took their innovation on several field trips through rural India, to be tested by their intended rollout demographic.  Through these trials they were able to tweak the design to address certain usability problems.

For example, to ensure that parents were inserting the pouch correctly, they designed it to mimic a cellphone SIM card, something the local people are very familiar with.  They also found that parents were distrustful of the LCD temperature indicator that had been designed into the pouch and would continue to heat it beyond necessity.  The team changed the numeric readout to happy face and sad face icons, to simply indicate the units readiness or lack-there-of.

Over the course of their product’s development, Chen and her team heard some gut-wrenching stories.

“We met a mother whose premature baby died because the doctor couldn’t do anything in the village and the nearest hospital was four hours away and she had no money to get there.  After another woman told me she had lost three babies, eight more women came forward with stories.  One woman, we showed it to, just cried.”

It is hoped that this game-changing product will save the lives of millions of children and prevent the development of serious health problems in millions more.

Research has shown that a decline in infant mortality results in a decline in population.  Over the long term, parents have fewer babies under the expectation that the children they do have will survive.  Over the next generation, we may see this simple sleeping bag change and improve the lives of countless parents and children across the developing world. – Jen R, Staff Writer