A judge in India has granted three-year-old Azeem Khan a special licence to ride a motorcycle after he proved he could control the powerful Royal Enfield Bullet. 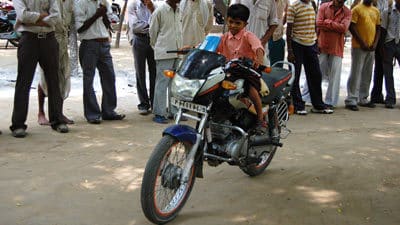 In order for him to be able to ride, the tot’s dad added special extensions to the controls so he could reach them.

“He is much safer than most adult drivers I know,” said proud dad Shantanu, of New Delhi.

“I used to sit him on my bike and he would always grab at the controls. One day he will be a professional racer for sure,” he added.

“Of course I won’t let him drive on the busy roads without me on the bike as well. I trust Azeem but I don’t trust other drivers,” he said.

And the pint-sized biker already has his sights set on his next set of wheels.

“What he really wants is a Harley Davidson but he’ll have to wait a few more years for that,” added his father.