“Sitting in the waiting room at the clinic, I glance at the other moms and would-be moms, anxiously anticipating whichever procedure or test they’re scheduled for that day. Most appear to be in their late 30s or 40s, but several, like me, have clearly reached – or passed – the big 5-0.” 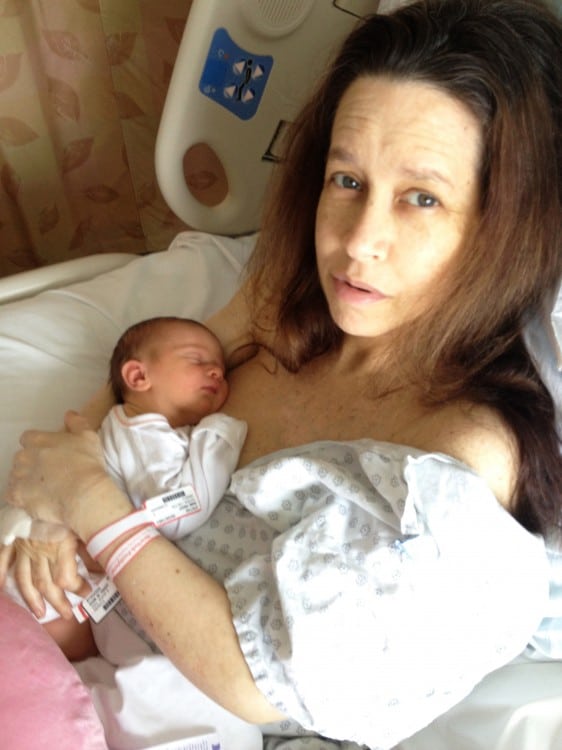 Tracey Kahn at 49 shortly after the birth of her first child, Scarlett, in 2012.

Tracey Kahn, a successful publicist living in Manhattan is currently expecting her second child, due in February. The 51 year-old mom to Scarlett, age 2, is no anomaly. She is among the large percentage of women over the age of 50 who have chosen to undergo fertility treatments. According to the CDC, between the years 1997 and 2008, the amount of children born to moms over the age of 50 have increased nearly fourfold.

At Reproductive Medicine Associates of New York, the staff routinely treats women who are over 50 years-old. Kahn says that those who think that her pregnancies are “strange and unnatural,” are allowed to think whatever they want, but she doesn’t “give a s – – t.” With a successful career, plenty of confidence, beauty, and an apartment on the Upper East Side valued at over $1 million dollars, Kahn has no doubt that she will find “Mr. Right” someday, at which point her children will have a loving and doting dad in their lives. But for the time being, the “traditional order of things” doesn’t matter to her. Knowing that she always wanted to be a mom, Kahn took the initiative when the timing was right for her.

In her 20s and 30s, while she wanted a baby, the timing was off. Holding down a 14-hour-a-day advertising job and balancing a hectic social life was no easy feat. Kahn elaborates,“It wasn’t as if I lacked suitable boyfriends. When I was 33, I got engaged – but called it off three weeks before the wedding. The decision was mutual because, amid all the frantic planning, we realized we were incompatible.” After telling her then-fiance that their relationship would not work, she had a few long-term relationships with like-minded men who connected with her. Many of those men had wanted marriage and children, but nothing ever came of those relationships.

At age 45, only two years after launching her own business publicizing high-end accessories and jewelry, Kahn fell pregnant by a man whom she had been dating for less than a month. Recalling the time, Kahn says,

“I was over the moon and planned to have the baby, whether or not my new boyfriend stuck around. Unfortunately, we never got to figure out a long-term plan because I miscarried at seven weeks. It was sad, but I didn’t go to pieces. I’m not that kind of person. Instead, the loss put me on the next path – seeking fertility treatment.”

By 46 years-old, Kahn had baby fever. Craving the maternal bond that comes with carrying a child for nine months, she decided to do it on her own, her own way, and on her own terms. She researched adoption, but knew in her heart that she wanted to experience pregnancy firsthand. With all of her resources in place, she set out on her journey to motherhood. Kahn enrolled at Weill Cornell and went on to have five unsuccessful attempts at intrauterine insemination using donor sperm.

After the failed attempts, she then went on to in-vitro fertilization using donor eggs. She recalls the process for choosing donors, “It was pretty intense choosing the donors – and it was done with the same dedication I apply to my work. The egg donor was a fashion major at Parsons – and, like me, Jewish, petite and from a big family. The sperm was donated by a tall, dark, sporty type with long limbs, beautiful eyes and almost a perfect SAT score. He was exactly the kind of guy I’d have dated in my 20s.”

Kahn’s embryo transfer procedure took place on Labor Day of 2011. This time, the attempt was successful and the embryo took on the first try. Kahn was pregnant with her first child, a girl. Sharing the joyous news with her 80 year-old mother, who was very old-fashioned, was a challenging task. Kahn recalls her mother asking, “How are you going to manage?” to which she replied “Everyone’s doing it, Mom. It’s a new age. It’s very hip.” After dishing the details on the sperm donor she used, her mother became excited and phoned relatives, saying, “Tracey’s pregnant. And the father’s gorgeous. He looks like a prince!”

Kahn’s daughter, Scarlett, was born on May 30th, 2012, via Caesarean section. With the fertility treatments costing over $75,000, Kahn says that she would “do it again in a heartbeat. I’m proof that just because a woman is single, older and career-oriented, she doesn’t have to give up on her dreams of being a mom. You really can have it all.” She is elated to be having a second child and to be providing Scarlett with a sibling to play with.

“As for the future, I know there will be challenges. Getting old is a bummer. The first 25 years with the kids will be great – I’m planning on lots of European vacations, and they’ll go to the best private schools in Manhattan – but, yes, it will get harder after that. God willing, by the time I’m in my 80s and they’re in their 30s, I’ll have raised them properly with the help of a good man whom I’ll meet and eventually marry. And they won’t be the ones looking after me when I’m elderly. I’ll hire a live-in aide. Odds are that I’ll be a viable, feisty, outgoing 80-year-old. It’s always been important to me to have a very good attitude.”