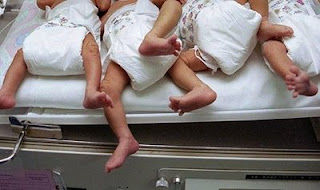 It is being reported that a 55-year-old Indian woman gave birth to quadruplets in Italy last week.

“We have been waiting for this moment for 15 years,” the babies’ 38-year-old father Pabla Maghar Singh said. “We are really very happy.”

The parents named the boys Manav, Manmeet, Roshan and Radveer.

The boys were born two months premature and weighed between one pound, 10 ounces and two pounds, two ounces. They are still inside incubators, but are doing well, the newspaper said.