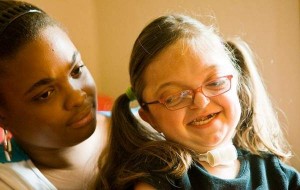 When Bridget Hospodka was born, her parents John and Theresa noticed she looked different, nothing too obvious, just a subtle difference with her eyes. It wasn’t until later that a great grandparent also noticed that she breathed noisily when she was breastfed that they had her checked.

At just a week old she had her first of a series of operations, to fix some unrelated intestinal problems. Then six weeks later she was diagnosed with a rare genetic condition that caused the bones in her face and skull to grow together too quickly called Pfiefer Syndrome.


Doctors told her parents that though Bridget would be fine mentally, she would need a series of operations beginning at 8 months on her skull to make more room for the developing brain. She might also have hearing and eyesight problems.

As Bridget grew older, John and Theresa knew that their daughter would not be easily accepted in public, but they took her out just like any other child and when strangers stared and asked what was wrong with their girl John would just say, “She was born different.”  Even Bridget showed her friendly and outgoing nature as she became older. When someone questioned she would respond, ‘My bones grew differently’ an continue to play and behave like a normal child.

According to her mom, by reaching out she eliminated any questions about her eyes and cut right to the playing, friendship and acceptance. 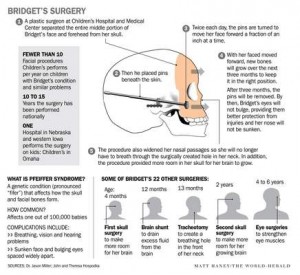 In the span of six years this amazing little girl has already faced 23 surgeries including a major one done on her face last week by Dr. Jason Miller and his team at Children’s Hospital & Medical Center, Omaha. The operation was done to separate the entire middle portion of her face and forehead from her skull and widen her nasal passage by placing pins. Before the operation Bridget had been breathing through a trach.

Doctors believe new bones will grow in three months time giving Bridget a more normal appearance without the bulging eyes or the sunken nose. It is possible that she many need another operation to move her face forward at the age of 17 or 18, but it is too early to know that yet.

The Hospodka’s hope that the surgery will help but are sure Bridget will conquer all her challenges in spite of her appearance because of her positive attitude.

“Her spirit,” Theresa says, “will serve her well.”