In July, we introduced you to the world’s oldest mom, who gave birth to twins at 70 via IVF all for the sake of producing a male heir to take over the family’s smallholdings. 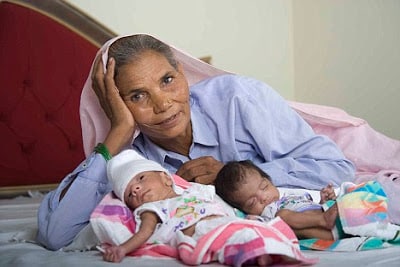 Omkari Panwar proudly showed off her son, then admitted: ‘Now I’ve got another daughter to feed too.’

Omkari and her husband Charan Singh Panwar, 77, who already have two daughters in their thirties, and five grandchildren, are near destitute after mortgaging their land, selling their buffalo and taking out a loan for the £4,400 fertility treatment.

The couple will now have to rely on family handouts and the charity of fellow villagers to bring up the little boy they so wanted, and the little girl they didn’t.

The new parents, who live in a tiny community in Uttar Pradesh, North India, were delighted to finally see and hold their two babies, now weighing a healthy 4lbs, six weeks after they were born on June 27.

‘We have not been able to see or hold them all this time,” said frail Omkari. “They had to stay in the hospital because they were so small.

‘We could not afford to stay there, so we had to leave them.’ And she added: ‘We paid all this money to the doctors for a son, but now we have the extra burden of another daughter as well.’

Boys are cherished in India because daughters are not allowed to inherit property but leave to marry and become part of their new husband’s family.The twins arrived at 34 weeks gestation weighing just 2lbs each. They will be named at a special Hindu ceremony next week when the whole community will celebrate their arrival into the world.

‘I’ve finally got what I wanted and I can die a happy man now,’ The new daddy said.

‘My wife will look after the babies when I am gone, and after she dies my other daughters will care for them.

‘It will be an honour for them to raise their new brother.

‘Now my daughters will have a family home to return to on religious days and special occasions.’ It is tradition for sons to remain in the parental home with their wives. On festival days the daughters of the family come to visit with their own husbands and children.

Some people would consider both babies a blessing – especially at this woman’s age. Related Articles: