Often when children with cancer get the opportunity to ‘Make a Wish’, they choose to meet a celebrity or go somewhere incredible like Walt Disney World.  But one Kansas City girl had a different dream – she wished to “take care of the world” or more importantly the places that she plays at in her community.

Amelia Meyer was diagnosed with brain cancer in December.  Jill Meyer, Amelia’s mother, told ABC News, “Amelia is a really happy kid, she loves the outdoors. She is definitely a very kind, very thoughtful girl. She loves to play outside. She loves to ride her bike. She plays softball and wants to play soccer in the spring.” 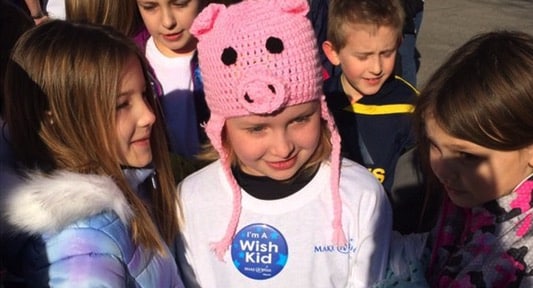 So it likely didn’t come as a surprise when Amelia chose to clean up the local parks in her city as wish through the Make a Wish Foundation of Missouri.

Together with Kansas City Major, Sly James, and members of her community, everyone picked up litter at three of Amelia’s favorite local parks.

Jill told ABC News the day brought so much joy to Amelia. “It was amazing. It exceeded any expectation we could have had.”

The young girl said she picked this wish because “I just like going on walks with my grandma and I find trash everywhere.”

Her selflessness has inspired her community to come together and has since inspired communities across the country, after the hashtag #AmeliasWish took the Internet by storm.

Local organizations like the fire and police departments showed their support, as did some of the local college sorority and fraternity chapters!

One couple also showed their support by collected 4 bags of trash while their went on their morning jog.

5 mile run +4 bags of trash=2.5 miles of clean trail! Thanks, Amelia, for inspiring us thru #AmeliasWish! #redshoekc pic.twitter.com/mydiA8FJiV

Congratulations to this little girl for creating a movement!