Home » 9 out of 10 Dads Present During Childbirth 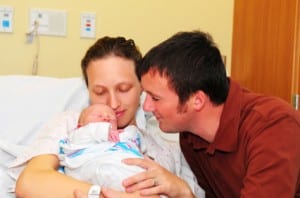 Years ago, it wasn’t uncommon for a dad to be sequestered outside the room until the baby had been delivered. Now, according to a new study, that has changed significantly and men are playing a more important role in the delivery of their child.

New dads are not only present during the birth of their child to offer support but almost 90% of them make a point to attend an OB appointment or ultrasound leading up to the big day.


The research, which was conducted by Oxford University polled  5,300 recent mothers who gave birth in a two week period in late 2009 about questions concerning their pregnancy. Although similar researches were conducted in 1995 and 2006 this was the first time that the role of fathers during pregnancy was also evaluated.

89 percent women said that their partner came to the birth and 88 percent said they accompanied them at least once during the ultrasound scans and antenatal checkups. Even after the birth of the child, fathers showed involvement with 65 percent helping change nappies and four out of five playing with the baby. Also more than 70 percent of them were able to take a paternity leave of almost four weeks.

Lead researcher Dr. Maggie Redshaw says, “Dads are often delighted, even bowled over to see their babies for the first time on ultrasound scans – the positive effect of this shouldn’t be underestimated.”

The survey also found out that 95 percent of women were seeing a doctor or a midwife by 12 weeks of their pregnancy which has increased compared to 82 percent in 1995. However, only two thirds had been offered antenatal classes.

Dr Redshaw said, “Not every woman will want antenatal education or classes during pregnancy, but it’s important that women at least have the option.”

It was also revealed that only 18 percent of women depended on only a single midwife during the course of pregnancy and a quarter had more than four or more midwives at various times.

Many mothers were worried of being left alone at some point of time though they trusted their midwives.

The UK government has been under pressure for quite some time now about increasing the number of midwives and according the National Childbirth Trust’s chief executive, Belinda Phipps this survey points out the immediate need.

“All these problems point back to a lack of midwives and investment in maternity services and we call on the Government to address these issues as soon as possible. Lack of antenatal care is also a worry – cash strapped trusts looking to reduce their costs will cut down or halt provision of antenatal classes. Couple this with the shortage of midwives and the outlook is not rosy. How many more surveys showing unhappy parents are needed before the message is heard, and real steps are taken to address their needs?”