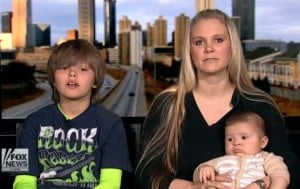 Susanna Rohm was holding her 2-month-old son, Isaiah, in her lap when he fell asleep abruptly. She knew right away that something was very wrong.

“I was holding him and it was the late afternoon, almost 5 o’clock. He was in my lap, and he just fell asleep very abruptly, and something seemed alarming about that. So I gave him another minute…I noticed he looked pale and so I looked at his arm and his leg and they were limp,” Rohm told Fox News. “Then I noticed that he looked like he wasn’t alive.”

Susanna tried everything she knew to do to revive her son.

At that point, she realized she needed help. Her cellphone had disappeared in all the commotion and she didn’t have a landline so she stepped outside to look for someone that could help.

“In the commotion, my cell phone flipped underneath the sofa that I was on and I wasn’t about to set him down to look for it,” she said. “I had him in my arms and still screaming over and over. Then I ran outside. I saw two boys paying outside across the street and I yelled, ‘go ask your parents to call 911.’”

Nine-year-old Rocky Hurt and ten-year-old Ethan Wilson were the two boys that Susanna saw. They had been tossing a football in a nearby front yard. But these amazing boys did more than just call 911; they helped save Isaiah’s life.

“I was thinking we better go out there to help and actually call 911 instead of getting scared,” Rocky told Fox News. “I ran over and I thought that there was a burglar in the house. I went inside just to make sure…I thought I could help.”

Rocky had followed Susanna back inside. He knew what needed to be done and he walked Susanna through CPR.

“I had run back inside after I asked the boys to have their parents call 911. When I came back in, Rocky had followed me back inside,” Susanna said. “I had my hand on Isaiah’s chest…I think he thought I might have been doing CPR…but I was just creaming. I didn’t know what to do and I’m screaming, ‘He’s not breathing. He’s not breathing.” And right then, Rocky said, ‘put two fingers on his stomach.’ He said, ‘press down five times,’ so I did five compressions, and then he said, ‘breathe in his mouth.’”

Rocky ran back outside to wait for the ambulance and Susanna continued CPR. After a few minutes, little Isaiah let out a cry. Rocky had come back inside at that exact moment. He knew that the baby’s cries were a good thing.

Rocky said he learned how to do CPR from posters at school and in his health class. Even more amazing is that he stayed calm enough to use the information when it was needed.

“I was calm that whole time,” Rocky said. “I never broke a sweat or anything. I was positive I knew what was happening and what I was doing.”

Susanna believes it was Rocky’s confidence and willingness to help that saved baby Isaiah’s life. She says that, had it not been for this little hero, Isaiah might not be here today.

Yet despite his newfound hero status, Rocky says he’s just glad he was able to save baby Isaiah’s life.

“I feel good, but I really didn’t care about being on TV,” he said. “All I cared about was saving baby Isaiah.”