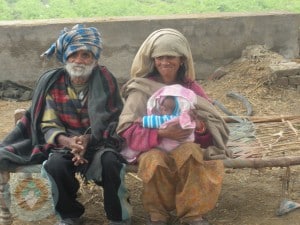 The wait to hold his own child is finally over for Ramajit Raghav, who became father to a son for the first time at the advanced age of 94.

Ramajit hails from a small village in India and has been working at his landlord’s farm for the last 22 years. He got married to Shakuntala, his second wife ten years ago who is believed to be in her 50s presently.

Shakuntala was admitted to the Kharkoda town Government civil Hospital last month where she delivered normally a baby boy.

The proud parents have named their baby Karamjit and his father insists that he is ‘God’s gift’ to him. He also adds that his age is only a number and he has a clear, clutter-free mind.

When asked whether he was worried about his child’s future, the new dad insisted he is in good health and that he would still be around in a decade.

‘Nothing will happen to my child as I will die only if a black snake bites me and that is very far,’ he said.

‘Visit me after 10 years and you will find me in the same appearance.’ 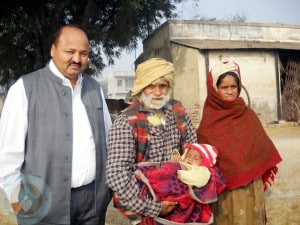 Dr. Mahendra Kumar the senior medical officer of the hospital confirmed the birth of the child and said that though it was a remote possibility to have a child at this age; it could not be completely ruled out.

‘Having babies at such age is remote possibility but then it can’t be ruled out as it just needs one sperm to fertilise the egg.’

With this birth, Ramajit has beaten the previous holder of the oldest dad crown in India, a 90 year old Nanu Ram Jogi, who became a dad to his 22nd child in 2007. – Atula, Staff Writer