Home » A 16 Month-Old’s Race Against The Clock Is Running Out, Needs Heart Transplant

When 16 month-old Olive Kang is feeling good, she just loves blowing kisses and giggling, and doing basically what any other 16 month-old would love doing. However, for little Olive, it seems that she hasn’t been able to do the things she loves lately. When she was born, doctors told her parents that the infant would survive two weeks, perhaps two months, if she was lucky, as she had been born with a very rare heart defect. But it seems that Olive has been defying the odds, and at sixteen months-old, she continues to defy those odds, but time is running out for the bubbly little girl in need of a heart transplant. 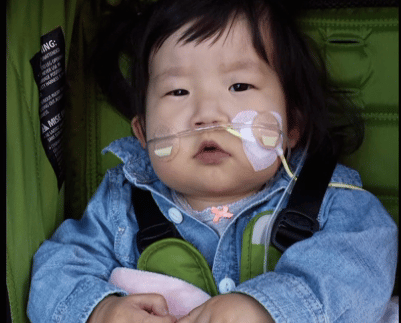 Olive’s mother, Robin said her daughter is, “funky and feisty. In the last two weeks, it seems like Olive is not – she can’t seem to hold her own without high-flow oxygen. They pretty much told us there was nothing they could do. We’ve heard that before, but we can physically see with our eyes that she’s not able to support herself.” The little girl was born with a myriad of heart and lung conditions including pulmonary atresia, major aortopulmonary collateral arteries and tetralogy of Fallot. If you combine all of these conditions, it makes her little heart and lungs unable to efficiently provide oxygenated blood to the rest of her little body.

Olive has undergone several procedures, include cardiac catheterization in order to widen her tiny pulmonary veins. However, her veins are scarring quickly and closing in fast. According to data provided by the Organ Transplant and Procurement Network, 21 people die each day waiting for an organ that never arrives. A new person is added to the transplant waiting list every ten minutes. For children, these odds are even worse. Last year alone, of the total of 27,036 lung and heart transplants that were performed, only 252 were in children under a year old, with 462 being performed in children between one and five years old.

But little Olive does have an ally on her side, with her aunt, actress Moon Bloodgood, who created a beautiful Youtube video to raise awareness about organ donation in which she talks fondly of Olive, saying, “so that beautiful children, like my niece, Olive, have a chance at a normal life. Please, please consider organ donation for people of all ages. It is truly the best thing that you can give.”