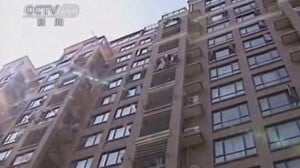 A toddler is alive but in critical condition after she fell from a 10th floor window and was ‘caught’ by a woman passing by.

Wu Juping, a mother of a seven-month-old baby, saw the toddler dangling from the window  and ran towards her with her arms outstretched.

The quick thinking mom suffered a broken left arm when the toddler landed on her before falling onto the lawn.  She also passed out from the force of the blow. 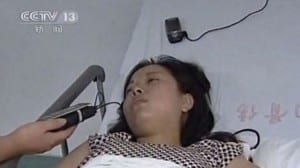 She is now in hospital as is the child who has internal bleeding and remains in a critical condition.

According to officials the 2-year-old, named Niu Niu, was home alone when the incident occurred.

Jin Dengfeng, director of a hospital in Fuyang city, said the woman had risked her life by breaking the child’s fall.

‘She could have died or been paralysed for life if the child had hit her head or her back,’ he said.

Wu said that because of her injury she would be forced to stop breast-feeding her infant son earlier than planned.

‘I don’t regret anything that happened,’ she said.


‘I just hope that Niu Niu will recover.’

This little girl has an angel watching over her. We have written many stories about toddlers who have been saved after falling from the third or fourth floor but never the tenth.