Maggie Gyllenhaal and Ewan McGregor were photographed working in the rain on Thursday(February 8th) for the upcoming film adaptation “The Corrections” in New York City. 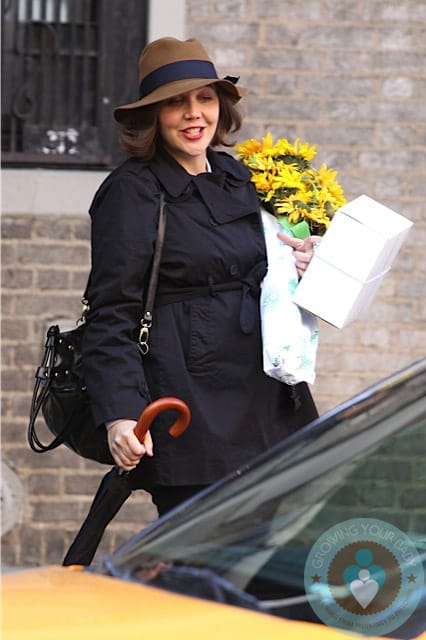 The actress, who expects her second child this Spring, used a variety of props to hide her growing belly.

Maggie’s husband Peter Sarsgaard recently revealed that the couple knows the gender, but are not yet decided on what to call the new addition.

“It’s the nice thing about knowing the gender of a child: you don’t have to call it ‘it,’ which gets really weird after seven months in. So we’ve been trying out a few names, but nothing solid.”

Maggie and Peter’s daughter Ramona is six and has been an only child her whole life and they think she “doesn’t know what she’s in for.”

“I’ve seen kids with siblings — I don’t have any siblings, so I don’t know — but they generally go for about five minutes, ‘Oh, cool! Anyway, what are we going to do now? Can we return it?'” Peter told reporters at Jay-Z’s concert benefiting the United Way of New York City and the Shawn Carter Foundation Tuesday. “I think it gets boring quickly, at first, and it takes a while for them to bond.”