As part of its commitment to ensure the highest quality nutrition products, Abbott’s Ross Products Division today announced that it is voluntarily recalling the following lots of liquid ready-to-feed infant formula in 32-ounce plastic bottles: 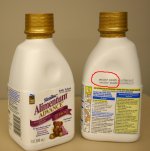 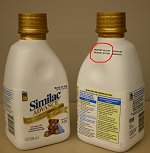 Hospital Discharge Kit – Lot 41699D5 Additionally, one lot of Similac Advance Hospital Discharge Kits may have included some of the affected 32-ounce plastic bottles. The lot number for these discharge kits (Stock Code #58986, Lot #41699D5) can be found on the back of the bear tag attached to the kit.

Abbott is voluntarily initiating this recall because some bottles from these lots may not contain as much vitamin C as indicated on the label. Abbott discovered this problem as a result of consumer complaints for an unusually dark formula color. This problem is due to an isolated bottle defect, which has been corrected by the third-party supplier of the bottles.

No serious medical complaints have been reported.

Vitamin C is an essential nutrient needed for the growth and repair of tissues in all parts of the body. Vitamin C deficiency symptoms could appear in infants if dietary intake is inadequate for more than two to four weeks. Symptoms of early vitamin C deficiency include increased irritability with generalized tenderness. It is highly unlikely that an infant will be fed affected bottles of the recalled formula exclusively for a long enough period of time to cause vitamin C deficiency symptoms. However, if parents or caregivers have any questions about their baby’s health, they should contact their healthcare provider.

No other liquid or powder infant formula products are involved with this recall.

These infant formula lots were distributed between May 18, 2006, and September 5, 2006, in the United States, Puerto Rico and Guam. If consumers have purchased any of the specific lots mentioned above at retail or received them from hospitals or doctor’s offices, they should contact Abbott’s Ross Products Division at 1-800-624-3412. Abbott will replace product from these lots free of charge.