Home » ACOG Agrees VBACs Are Safe For Most Women 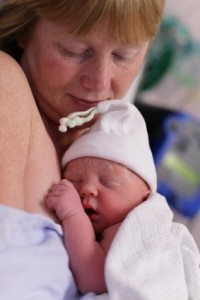 For years, attempting a vaginal birth after a cesarean (VBAC) was considered too dangerous to try. The American College of Obstetricians and Gynecologists (ACOG) have now released a statement that for most women, trying for a vaginal birth is safe after a c-section birth.

From the 1970s until now, the rate of cesarean births has risen from 5 percent to 31 percent. Women attempting vaginal births after having c-sections has always been low, reaching it’s peak in 1996 at 26 percent. Recent studies, however, has shown the rate dropped to only 8.5 percent. A large part of this is the restrictions that many hospitals and doctors have put on mothers who have had cesareans.

Richard N. Waldman, MD, president of The College, says the rising cesarean rates are a concern to many doctors. He hopes that with these new guidelines more women who can have VBACs will be able to do so.

Moving forward, we need to work collaboratively with our patients and our colleagues, hospitals, and insurers to swing the pendulum back to fewer cesareans and a more reasonable VBAC rate.”

The new guidelines continue with the previous decision that women with one previous cesarean delivery with a low-transverse incision are eligible to try for a vaginal birth. A major change is the understanding that women with two previous low-transverse cesarean incisions, women carrying twins, and women with an unknown type of uterine scar should be allowed to go into labor on their own rather than scheduling a repeat c-section immediately. The emphasis on trial of labor after cesarean (TOLAC) will allow many women the chance to work with their bodies.

Both repeat c-sections and TOLAC carry risks of maternal hemorrhage, maternal hemorrhage, and death. However, 60-80% of VBAC candidates are successful. Having a vaginal birth offers women many health benefits over cesareans, including a lower risk of infections and a shorter postpartum recovery time. Some feel that having a VBAC lowers a woman’s rick of bowel and bladder injury, as well as placenta previa and placenta accreta.

Uterine rupture is the most typically cited reason for having a repeat cesarean. Currently the risk is only between 0.5% and 0.9%. Despite it’s low risk, many hospitals feared medical liability if something did happen to a woman.

“Given the onerous medical liability climate for ob-gyns, interpretation of The College’s earlier guidelines led many hospitals to refuse allowing VBACs altogether,” said Dr. Waldman. “Our primary goal is to promote the safest environment for labor and delivery, not to restrict women’s access to VBAC.”

According to the ACOG, restrictive VBAC policies should not be used to force a woman into a cesarean. However, if a physician does not feel comfortable with a woman’s risk factors he should refer her to another for her care. – Summer, staff writer