Thandie Newton is a proud home-birthing mom. During an appearance on the Today’s Show on Thursday the beautiful actress revealed she gave birth to all of her three kids at home, most recently her 11 week old son on the bathroom floor this March!

The 41-year-old British actress, who is currently doing the media rounds to promote her show, said that she feels more ‘normal’ or comfortable giving birth at home.

Thandie says that it might be because she has never been too fond of hospitals.

‘I had just associated hospital with being ill, and I felt beautiful and healthy and wonderful when I was pregnant, and being at home is the place I felt most relaxed and comfortable,’ the Crash star said.

She added that it is not really unusual to give birth at home.

‘So for me, it feels normal, but there was a time when everybody had their babies at home and it wasn’t such a big deal.’ 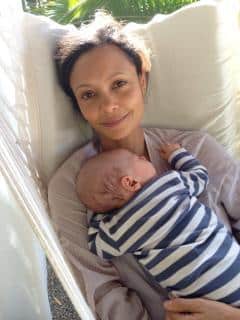 Thandie also revealed she had the same midwife all three times that she gave birth.

The next day she thanked the ladies who assisted in his arrival saying,

Her son’s birth, she joked, has prompted her daughters be more maternal.

The busy mom and actress currently stars on the DirecTV series Rogue as a San Jose detective who goes undercover to bring down a crime boss.  The show’s second season will premiere on May 28.