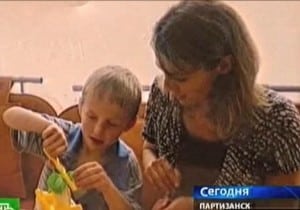 Adoptive mother Torry Ann Hansen has launched a major controversy after sending her adoptive son back to Russia, citing “severe psychopathic issues/behaviors.” The event has become so huge that Russia has threatened to end all US adoptions for this.

When Torry Hansen visited her son in a Russian orphanage she had no idea that there would be serious problems with him. Relying on good faith that the people working there would tell her, she assumed he was a normal boy in need of a loving home. That ended when she brought him to her home in the US. According to the letter accompanying the boy, 7-year-old Artem Saveliev had “severe psychopathic issues/behaviors” and posed a danger to Hansen, her family, and friends. In a decision that would affect thousands, Hansen gave up and sent the boy back to Russia.

Though the boy has not been officially diagnosed, this behavior is all too common among some adoptive children. Especially those who suffered extreme abuse or neglect in the early moments of their life. Reactive Attachment Disorder (RAD) is a failure to build attachments to other people due to this neglect or abuse. According to RADKid.org, a child with this problem can be very charming to strangers and those who the child wants to manipulate. Unfortunately this charm is in appearance only. RAD children can escalate into rages and violence, often lack empathy and morals, and may see loving relationships as a threat.

Only 7 months after adoption, Hansen sent the boy back to Russia with a note explaining the problems and asking that the adopted be terminated. She gave him candies, coloring books, and pens for his flight back. This action has sparked outrage within Russia, who is now threatening to prevent all US couples from adopting children from Russia. According to Russian officials, what Hansen did was nothing short of abandonment.

“If his American parent kicked him out from the country on a plane like a sack of potatoes, then we will look after the boy. Our care system will take up the case. After a full medical examination, he will be placed in one of our orphanages,” said Pavel Astakhov, the Kremlin’s children’s rights commissioner.

According to officials, Artem cried when talking about his adoptive mother and made claims that she pulled him by the hair and called him bad. Doctors said they found no signs of abuse on the boy.

In 2009 close to 1,600 Russian children were adopted into the US according to the National Council For Adoption, a U.S. adoption advocacy nonprofit group. – Summer, staff writer