Home » After 65 Surgeries, Boy that Swallowed a Button Battery is Doing Well

Button batteries can be found in everything from children’s toys to remote controls to greeting cards. Potentially lethal, they have put many children in danger. Emmett Rauch was one of those children.

Having been born a preemie, Emmett had already shown his fighting spirit. Then, at just over a year old, he swallowed a button battery. The result would be a fight for survival that would rival the one he’d fought at birth. In fact, when we shared his story in 2011, he was two and still fighting for his life. 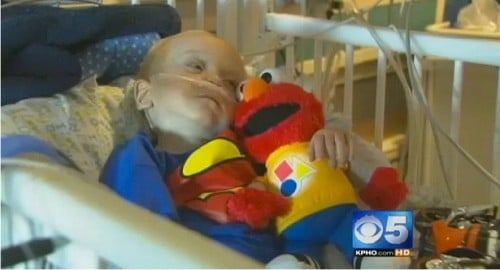 “Emmett had just had his first birthday. It was a Saturday, and we noticed he had a fever and was coughing, but there had been no choking episode. The doctor said it was just a cold and had to run its course. But he was lethargic and crying every time he tried to eat,” Emmett’s mother, Karla Rauch, told TODAY. “On the following Tuesday, when Emmett coughed and blood came up, we called the pediatrician. I was freaking out. She said it sounded like croup and sent us home. But as I was walking to the car, the pediatrician came out and said, ‘I have this feeling—send him to the ER.’”

It was in the emergency room that a radiologist found the button battery lodged in Emmett’s esophagus. He was then rushed by ambulance to Phoenix Children’s Hospital where doctors conducted a three-hour surgery to remove the battery from his throat.

“The surgeon said it looked like a ‘firecracker had gone off’ in Emmett’s esophagus,” Karla said. “It was lodged a centimeter above the aorta and they couldn’t tell if he’d survive. At that moment, we fell apart. How did we not know? And where did he get the battery?”

That same night, Emmett’s heart stopped. Doctors were able to revive him, but he still had a long and difficult fight ahead of him. He went through 13 major surgeries that year, including a surgery in which half of his stomach was used to recreate his esophagus. After that surgery failed, doctors stapled the bottom half of his esophagus to the outside of his neck for three months, and then they put in a feeding tube so that he could receive food and water.

“Emmett lived in the ICU for eight months in 2011, and there were times when we thought he would pass away,” Karla said. “It was very humbling to watch him, because he has this fighting spirit. He stole the hearts of all the nurses and doctors with his beautiful smile.”

Then, in 2012, doctors at Cincinnati Children’s Hospital Medical Center performed a very rare surgery—they removed his entire esophagus and replaced it with a part of his colon. Emmett also had two inches of his rib cage removed and then used to help open up his paralyzed vocal chords.

“It’s one of the hardest things I’ve ever been through,” Karla said. “Ever day, even when he was in a medical coma, we would talk positively to him: ‘Emmett, you can do this.’”

Now, at five-years-old, Emmett has endured 65 surgeries, and there are some life-long complications. His stomach is tiny, so he has a feeding tube in his small intestine to ensure he receives enough nutrients, and his vocal chords will never be the same. But he is alive, and for that, his parents are eternally grateful. 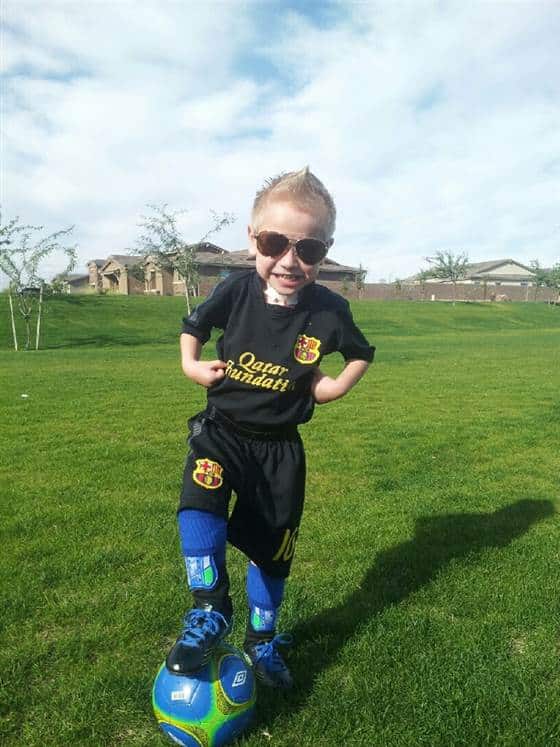 “Emmett is doing well. He loves wrestling with his older brother and he’s playing with his friends on the trampoline and the swing set. He had his first soccer practice, which he’s been waiting to do,” Karla said, adding that she looks at life “differently now.”

“We didn’t know how long Emmett would be with us,” she said. “Every kiss, every hug, every ‘I love you’ is so important. We realize what is important in life . . . you treasure moments.”

But the family is doing more than just treasuring their moments; due to the lack of information that was available when Emmett started his struggle, they started up a non-profit organization to raise awareness and hopefully help prevent other children from having to endure the same struggle as their son.

“We went online to find support and there was very little, only a paragraph by the National Poison Control Center,” Karla said. “[Then], while we were in the hospital in Phoenix, a Hispanic boy was flown in from Yuma, and he had the exact same thing, but there was a language barrier involving his family and the staff. The social worker asked if I would be comfortable talking to his mother. I broke down in tears because, I realized, this had become our mission. So we started an awareness campaign coordinating with Safe Kids and National Poison Control.” That campaign has spread awareness about button batteries in more than just the states—in fact, parents as far away as South Africa and India have written letters to the family, sharing their experience with tiny and dangerous batteries.

“Every story is the same: Parents don’t see their kids choking, and it gets misdiagnosed. We didn’t know, and our pediatrician never said anything,” Karla said. “I am heartbroken that Emmett has had to suffer, and I would have taken his place in a heartbeat. But I am grateful that there is some sort of silver lining that is helping to save other children from suffering and possibly losing their lives.”