Six years ago Carolyn Savage gave birth to another couple’s baby. The result of an IVF mix-up, the story made national headlines. But it wasn’t until 2011 that Carolyn and her husband decided to share their side of the story – the pain, the loss, and the realization that Carolyn couldn’t carry another baby…or so she thought. Now a mother to five – one conceived naturally, two conceived via surrogacy after the IVF mix-up, and two others born via IVF – Carolyn is expecting child number six, who was conceived….naturally. 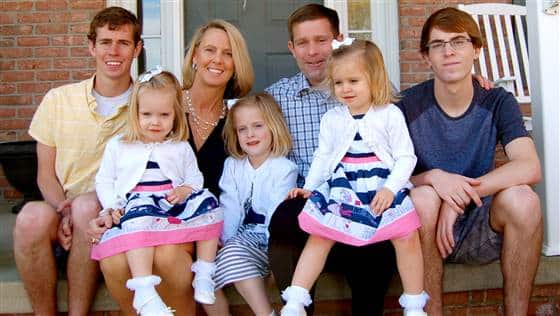 Her current pregnancy started with one little at-home pregnancy test – a test she first read incorrectly.

“When the first little line popped up on the home pregnancy test, I scolded myself. Of course it was only one line. It was always one line. I’m infertile,” Carolyn told Today.com about the test. “Then I realized I was holding the test upside down. When I turned it right side up, I was startled: turns out that one little line was the results line…not the control line I’d seen so many times before.”

But even staring at that positive line, Carolyn struggled to wrap her head around what she was seeing right in front of her. She had to know for certain, so she went into the other room, where there was more light.

“I held my breath, closed my eyes and waited for a few more seconds,” she said. “When I opened the, I was astounded. There were two lines. Two of the darkest pink lines I’d ever seen on a pregnancy test. The test was positive. I was pregnant.”

But even with that test in her hand, Carolyn had a hard time coming to terms with the idea that she and her husband, Sean, had simply conceived naturally after all they’d been through – the treatments, the fertility drugs, the IVF mix-up, the surrogacy. It seemed too good to be true.

“The idea that a couple can simply have sex and conceive? For me and many other women who suffer from infertility, that is the stuff of fairy tales. I didn’t get pregnant that way. I needed drugs, ultrasounds, needles, blood work, petri dishes, doctors, surgery, and truck-loads of money to conceive,” she said. “Sean and I have had unprotected sex for our entire 21-year marriage and conceived spontaneously exactly once – and that little bundle of joy was about to turn 20.”

As reality started to sink in, Carolyn started to realize that there would be greater risks. For one, she had been told that her body couldn’t handle another baby. Another factor was that she was now 45-years-old.

“I immediately rushed to my computer to Google ‘pregnant at 45.’ What were the odds this would even last? Turns out, not so good,” she said. “Some of the sites reported miscarriage rates as high as 90 percent for a woman my age. I told Sean later that night and followed the news up with the sobering statistics and the warning, ‘This probably won’t last.’”

And that’s exactly how she approached the pregnancy – with the mindset that this would simply be another heartache, another loss, another baby that they wouldn’t be able to hold. But as each test came and went, all with positive results, hope started to win out.

“We waited to lose this baby,” she said. “[But] lo and behold, our first appointment passed with an ultrasound of a healthy seven-week-old fetus. Then our 11-week appointment passed with hopeful results from our nuchal translucency, a test that gives a ratio for chromosomal abnormalities. Finally, at 15 weeks, we received the results of our cell free DNA study: Our baby was chromosomally typical, and he is a boy. A son.”

And now they are making headlines, yet again, as they anxiously await what looks like will be a healthy, and very loved, little boy.

“So here we are. I slam-dunked my first trimester, our new son appears to be healthy and so far, this pregnancy has been free of complications,” she said. “I’ve left this morbid state of waiting to miscarry and moved onto a happier, more confident – but not cocky – place. It’s time to share our surprising news. Our family of seven is preparing to become a family of eight.”

Congratulations to the Carolyn and Sean! We wish their entire family the very, very best.