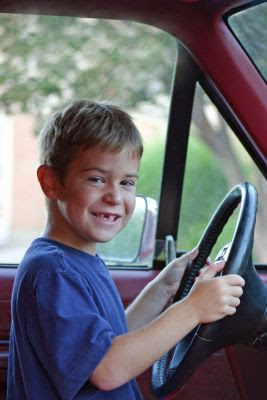 A 6-year-old Virginia boy who missed his bus took the keys to his family’s vehicle and drove nearly six miles toward school while his mother was asleep.

He made at least two 90-degree turns, passed several cars and ran off the rural two-lane road several times before hitting an embankment and utility pole about a mile and a half from school.

Luckily the determined boy only suffered minor injuries and authorities drove him to school after he was evaluated at a local hospital for a bump on the head.

“He was very intent on getting to school,” said Northumberland County Sheriff Chuck Wilkins. “When he got out of the car, he started walking to school. He did not want to miss breakfast and PE.”

His parents, Jacqulyn Deana Waltman, 26, and David Eugene Dodson, 40, are each charged with child endangerment and his mom is being held without bond. His dad was released on a $5,000 bond.

The boy and his 4-year-old brother were placed in protective custody.

“This really is a story of miracles,” Wilkins said. “The Lord was with him, along with everybody else on the highway.”