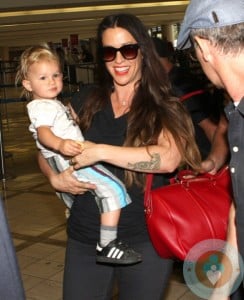 Its been four years since Alanis Morissette’s last album, Flavors of Entanglement. But this rocker chick hasn’t been lying down on the job. She’s been busy taking care of her son, Ever, now 20 months old.

“He’s the apple of my heart’s eye,” Alanis told Shawna Malcom from Florence while on tour.

Her upcoming album, Havoc and Bright Lights, set to release on August 28th, was recorded in her home studio. When asked what it was like recording so soon after delivering Ever, she responded:

“I’m still in that fuzzy zone – I’m not sure that baby brain ever really goes away! I wanted to write the record and be available for breastfeeding, so I built a makeshift studio in our house. Basically, whenever I had a break, I was with my son.”

But Ever isn’t left out when it comes to listening to his mother’s melodic voice. Alanis admitted that she does sing to him, but the songs she sings to him aren’t exactly traditional lullabies.

“I make up lyrics to well-known lullabies,” she confessed. “Mostly because I don’t actually know a lot of the lyrics.”

Ever doesn’t get all of her attention, though. In addition to her tours and recording, this celeb may be up for a judge’s seat in the upcoming season of American Idol. She hasn’t confirmed nor denied the rumors, but has admitted that she would be interested. 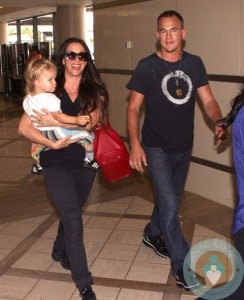 But, judge or not, one thing’s for certain – nothing is getting in the way of this rocker chick’s downtime. She and rapper hubby, Mario “Souleye” Treadway, have mandatory date nights.

“We just put it in the calendar, and it’s mandatory,” Alanis said. “We have an understanding that when we’re on our dates, we can’t talk about work. We can talk a little about being parents, but we keep it mostly about us and being best friends.”

And on Sundays, the whole family relaxes.

“When I’m off the road, my husband and I recharge our batteries. It’s a day of deep rest and connection with the spiritual, and that can be anything – going for a walk in nature, being in silence, burning incense,” Alanis shared.

Alanis says that she and her husband work as a team when it comes to raising Ever. They also have some outside help.

“A village is needed,” the 38-year-old rocker said. “I think it’s irresponsible when celebrities imply that they’re doing it all themselves. My son has aunties and uncles around all the time, and my husband is my hero. He’s really full-on. I couldn’t do it any other way.”

But having a baby doesn’t make her a grown-up, at least not when it comes to her one must-have item while on tour.

“I need to have my blankie,” she laughed. “I’ve had one my whole life. The Barefoot Dreams bamboo blanket is the softest on the planet. If I lost it, I’d be like a two-year-old screaming for her Binky.”