It’s no news that there are risks to consuming alcohol during pregnancy, including everything from an increased risk of heart defects to miscarriage. Even more concerning is that many of the studies conducted show that these complications can arise very early in pregnancy. The latest suggests that, even at 3 to 4 weeks gestation, prior to when women even know they are expecting, alcohol consumption can alter gene functioning in the brains of fetuses, leading to long-term brain structure changes. 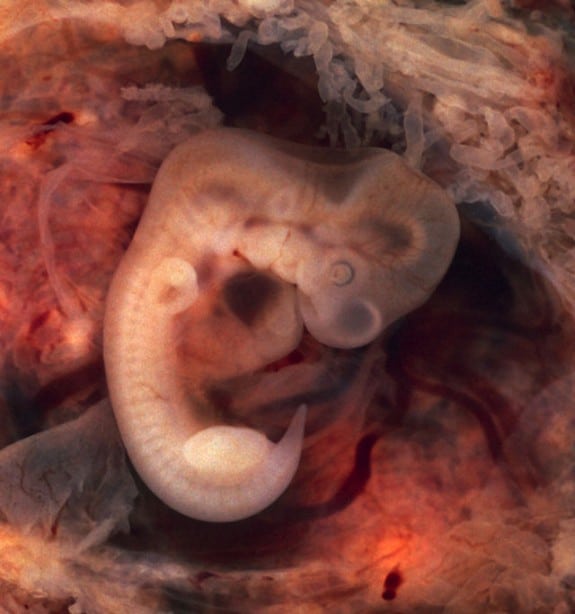 Published in the journal PLOS ONE, the study looked at and identified gene changes in the gene functioning of mice, as well as in other body tissues. Led by Dr. Nina Kaminen-Ahola of the University of Helsinki in Finland, the authors say that their findings indicate how alcohol exposure, even in very early pregnancy, can cause lifelong changes to gene regulation in embryonic stem cells (the earliest stem cells to emerge from an embryo).

To achieve their results, researchers fed alcohol to a group of pregnant mice during their first 8 days of gestation. This is equivalent to about 3 to 4 weeks gestation in humans. Researchers then analyzed the effects of the alcohol on the fetuses, focusing specifically exposure’s influence on the epigenome of the hippocampus, an area of the brain that plays a crucial role in both learning and memory.

Results showed that, when compared with other, non-exposed offspring, the mice fetuses that had been exposed to alcohol had altered epigenomes. This led to changes in the function of several genes within the hippocampus. Changes in the function of two other tissues were also found, including the bone marrow and olfactory epithelium of the snout. And MRI assessment of the brain structure showed that, when the offspring reached adulthood, there were identifiable alcohol-induced changes, particularly in the hippocampus, olfactory bulbs, and cerebral ventricles. In fact, the researchers say that these exposed mice showed symptoms quite similar to fetal alcohol syndrome (FAS), a condition currently difficult to diagnose, and difficult to pin down when and how much consumption causes it. It includes a reduction in growth rate, structural changes to the face and skull, as well as hyperactivity.

“The results support our assumption that alcohol permanently alters gene regulation at every stage. This would be significant for the challenging diagnostics of alcohol-induced damage,” Dr. Kaminen-Ahola told Medical News Today. “The mechanisms and biological markers that can aid in diagnosis are studied so that we can offer the developmental support necessitated by the damage as early as possible. Ideally, a swipe sample from the inside of the mouth of a newborn could reveal the extent of damage caused by early pregnancy alcohol exposure.”