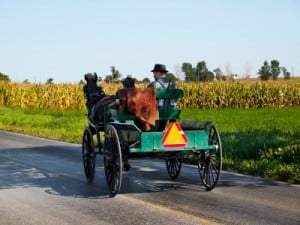 “The rates are very, very low,” said Dr. Mark Holbreich, lead author of the study, “So there’s something that we feel is even more protective in the Amish [communities],” than in the European farming communities.

In the European farming communities, researchers have referred to the low rates of allergies and asthma as the “farm effect.” But very little research has been done to determine if this same “effect” applies to children raised on North American farms.

Holbreich, who has treated Amish communities in Indiana for two decades, tracked the studies performed in European countries, and wondered how children raised on farms in the United States compared to the European studies. For him, the Amish were an easy study.

With the help of European colleagues, Holbreich compared the asthma and allergy rates of Amish children in Indiana with those of both Swiss farming children and non-farming children. Many Amish families have roots that can be traced all the way back to Switzerland, so it would seem, initially, that the rates were about the same, when taking genetics into factor. After compiling the results, however, it seems that Amish children fare even better than children in Switzerland.

The data consisted of 157 Amish families, 3,000 Swiss farming families and nearly 11,000 Swiss families that did not live on farms. All of the children involved in the study were aged between six and 12. All families were surveyed about asthma and all children were given skin pricks to determine whether or not they were predisposed to having allergies.

Previous studies have pointed towards microbe exposure and contact with cows to explain the decreased rates of allergies and asthma among farm-raised children. Holbreich also believes that raw cow’s milk may play a part. Right now, most of the scientific community involved in these studies believes that the early exposure to various allergens and pathogens actually teaches the body to recognize common allergens without over-reacting to them.

But these theories apply to all farm children. Why would Amish rates be so much lower? Holbreich can only theorize and he believes that it may have something to do with the fact that Amish families are generally much larger and that they tend to spend more time outside or in barns than children on more modern farms.

Dr. Corinna Bowser, an allergist in Cherry Hill, New Jersey, says that another possibility is the lack of gene pool diversity among the Amish.

“The Amish are still of a limited gene pool,” says Bowser. “I would assume, because they’re much more segregated than the Swiss kids are.”

Holbreich hopes to perform follow up studies that may shed some light on the subject and hopes that the information he finds will help children in all parts of the country with the increasing allergy and asthma epidemic.

“The goal is to try and find a way to prevent this allergy and asthma epidemic that western populations are facing,” said Holbreich.