During her appearance on The Ellen DeGeneres Show on Friday, Alyson Hannigan revealed that she is finding that being pregnant not only gives her cravings – but makes her feel like a stoned Koala bear. 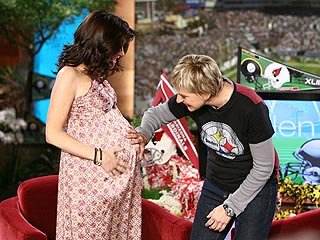 “I get tired a lot and I have pregnancy brain, which I never realized was a thing but it is,” the expectant mom told the host. “I sort of feel like a Koala bear where I’m slightly stoned all the time and I’ll say the wrong word.”

Not one to miss a good comeback, Ellen DeGeneres responds,

“I’m not pregnant, but I have that brain too. I don’t have an excuse.”

The mom-to-be also told the host about her not so weird craving,

“[I crave] ginger ale big time,” she said. “I didn’t drink soda before and suddenly it was like, ‘I need a ginger ale,’ and surprisingly my mother craved ginger ale when she was pregnant with me as well.”