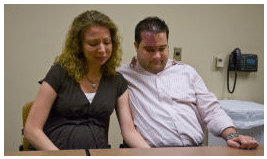 Just 2 weeks after welcoming their 6 tiny babies, Amanda and Thomas Stansel are coping with the loss of another baby.

Braden Thomas passed away early yesterday after fighting a staph infection in his windpipe.

The couple took to their blog to discuss their last minutes with Braden saying,

“We were able to hold him during his last moments. How special that was for us. He is a perfect angel. We are so grateful for the 2 weeks we did get to spend with him. We are so emotionally drained and exhausted. This has been so hard for us to lose 3 of our children within two weeks.”

Their nutrition comes intravenously because their intestines aren’t developed . Their risk of infection remains high. They are expected to remain on ventilators for several months. Brain hemorrhages in all three girls could have lasting effects, such as cerebral palsy or mental retardation.

Rachel is doing the best: She has the least-serious hemorrhage, and it’s on just one side of her head.

The babies haven’t grown much since birth. Each remains about a pound.

The couple has refrained from releasing pictures of the newborns and hasn’t allowed the media to view or photograph the children.

Even with all they’ve endured, the Stansels wouldn’t do anything differently.

“Not in a heartbeat, we wouldn’t have,” Thomas Stansel said. “We’ll let God handle that. Not us.”

My heart goes out to this couple. We pray that the remaining babies continue to grow and stay healthy.

I was a wreck during my time in the NICU with one baby. I cannot imagine how they were doing it with 6 – now 3.