Home » Amazing Baby Continues To Fight After Being Taken Of Respirator 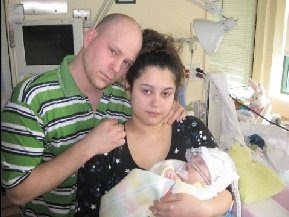 Baby Kaylee continued to defy the odds yesterday, breathing on her own for a second day after she was removed from a respirator in anticipation that she would become a heart donor for another infant.

The two-month-old baby has Joubert’s Syndrome, a malformation of the brain that can compromise breathing, balance and development, and is not usually fatal.

She was admitted to The Hospital for Sick Children on March 16. The next day her parents read a March 17 news report in the Toronto Sun about another patient in the neo-natal intensive care unit, Lillian O’Connor, of Prince Edward Island, born March 9 with a fatal heart defect. It said two surgeons were at the ready to fly anywhere in North America to retrieve a suitable transplant heart. When Kaylee’s diagnosis was judged so severe she would die without continued breathing support, the babies seemed star-crossed. Kaylee could die, and her heart would keep beating.

The problem was that the hospital did not agree, saying Kaylee’s heart could be damaged as she died naturally. It later relented, saying in a statement this was a “complex situation” that “evolves on a day-to-day, and moment-to-moment basis.”

When her breathing machine was disconnected on Tuesday night, the country was in awe, not just for the scientific rarity and wonder of the impending transplant, but also the powerful image of the beating heart.

By Wednesday morning it became apparent that Kaylee’s survival may put the donor hopes in jeopardy. A donor and a recipient had been pre-matched for a life-saving donation, that was to not happen because the donor was still alive.

Today, this amazing baby is requiring oxygen to help her breathe, but is not on a respirator. Her parents said they don’t know if or when they would be asked to decide about putting her back on the machine because her breathing remains extremely erratic. She sporadically has periods “where she doesn’t breathe for 30 to 50 seconds,” her dad told the media today.

While no one knows what will happen over the next day, week or month, doctors have repeatedly told Kaylee’s parents that their daughter is going to die.

If she stabilizes doctors have told her parents that if they take her home, it would only be so she could die outside of hospital.

We wish this family strength and hope that the general public understands that it is hard to be under the microscope when your baby is slowly dying.

It was very brave of them to offer their daughter’s heart to any baby. Across Ontario, 26 children are awaiting organs, eight in need of a heart.