Home » Amazing Micro-preemie Defies Odds By Surviving Without A Pancreas 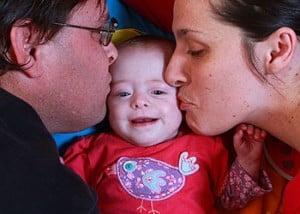 When tiny Sarah Innes was born, doctors struggled to believe what they were seeing, let alone determine how to save the remarkable girl.

Despite being the only baby born in Australia without a pancreas, Sarah has defied her grim odds and is now thriving with the help of her loving family and a team of medical miracle workers.

Arriving nine weeks premature on November 28 last year, Sarah underwent her first major surgery at just six days old. That’s when Royal Children’s Hospital doctors discovered Sarah’s internal organs were a mirror image of a normal person’s, including a back-to-front bowel and appendix. Her missing pancreas caused her blood glucose levels to be up nine times what they should be.

Sarah was also missing a gall bladder and will need surgery before her second birthday to repair a heart valve.

But it is the absence of a pancreas that has made her early life a battle for survival. Without it Sarah does not produce any insulin and has suffered all the dangers of diabetes since birth.

She also faces the extra danger of not producing the enzymes required to break down her food, so she cannot put on weight or absorb the nutrients she needs to survive.

At just 735g, Sarah became the youngest person ever fitted with an insulin pump, which sits outside her body and sends a tiny dose of insulin through a needle in her leg every three minutes.

She will also have to take food supplements containing enzymes for the rest of her life to break down her food, but Royal Children’s neonatologist Dr John Mills said it was remarkable Sarah had even made it home.

“Having those two things for a person of any age is a very serious illness. But for a newborn baby — and especially a premature baby who weighed less than half a normal baby – it is a disastrously serious thing to happen,” he said.

With a simple cough or cold presenting a major danger to Sarah and the constant need to adjust her insulin levels, Dr Mills said the devotion of her mother was the true reason for Sarah’s survival.

Some babies are just born to live. Sarah has fought from before she arrived. I hope continues on her amazing path.