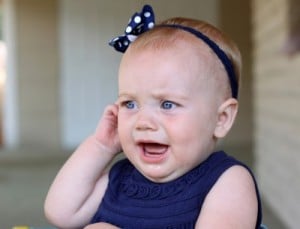 Acute Otis media, otherwise known as ear infections, occur when a bacterial or viral infection causes inflammation in the middle ear. This causes the small tubes (Eustachian tubes) behind the ear drum to become filled with fluid and mucus. Eventually, this buildup of fluid will cause bulging of the ear drum, which almost always results in pain. Children are at highest risk for developing ear infections because their Eustachian tubes are narrower, which makes it more difficult for fluid to drain from them. In fact, three out of four children will have at least one ear infection by the time they reach the age of three, which makes ear infections the most common infection experienced by young children.

It is because they are so common that pediatricians are concerned about how ear infections are treated in children. In most cases, antibiotics are used as a first-line form of treatment. However, the authors say that around 70 percent of children recover without antibiotics within 72 hours. Experts fear that the unnecessary overexposure of antibiotics may result in a development of superbugs over time.

“The bacteria that do survive the antibiotic get tough, and the next time you get an ear infection or any other type of infection, they’re harder to manage,” Dr. Richard M. Rosenfeld, a professor and chairman of otolaryngology at SUNY Downstate Medical Center in Brooklyn, told NPR.

The concern of over-treatment of antibiotics prompted academy researchers to review previous studies on ear infections. They wanted to try and come up with a better method for treating ear infections in children between the ages of 6 months and 12-years-old. What they found led to a revision of the treatment guidelines. Unfortunately, after conducting a review of studies since that time, the academy says that very little has been changed in the way of treatment since the original revision back in 2004, despite the publicity. For this reason, they are reasserting the importance of avoiding antibiotic overuse for ear infections.

Parents may first become aware that there is a problem when a child starts tugging at its ear, or when the child seems fussier than usual. The parent may also notice drainage or that the child is having difficulty sleeping. Hearing issues or balance problems may also be noticed, either by parents or physicians.

According to the new guidelines, clinicians should recommend pain relievers at first, to help relieve the pain often associated with ear infections. If the child does not improve within 48 to 72 hours, antibiotics may be given to help fight the infection; this guideline even applies to children under two, who were previously recommended to receive antibiotics upon initial diagnosis. Additionally, the academy says that antibiotics should never be given as a preventative measure for children that suffer from frequent ear infections.

Antibiotics may be given upon initial diagnosis in certain conditions, however. Children that have had pain and swelling for at least 48 hours, children who have had a fever higher than 102.2 degrees Farenheit, and children that have a ruptured eardrum can and should be given antibiotics immediately.

In addition to reasserting the new guidelines, academy authors revisited the importance of using preventative measures like keeping children away from second-hand smoke, getting the influenza vaccine every year, and breastfeeding exclusively for the first six months of the child’s life.

“Studies show that anything that decreases viral infection will decrease the incidence of [ear infections],” guideline lead author Dr. Allan Lieberthal, a clinical professor of pediatrics at the Keck School of Medicine at USC, told HealthDay.