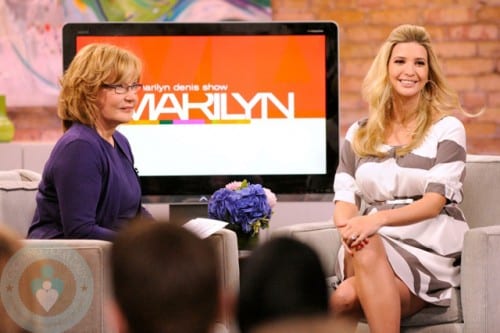 The designer and daughter of real estate mogul Donald Trump is due with her first child in July.  During the interview Ivanka revealed that she knows what she is having but ‘is trying to keep it under wraps.’

When asked if she had chosen a name Ivanka said she had a name for both a boy and a girl so she may have to have a brood to use all of the names she likes. She also mentioned that she would like to incorporate both her’s and husband Jared’s grandfather’s names into the mix if it’s a boy.  If the rumour mill is right, the mom-to-be may have to wait until the next baby to honor her grandfather.  Back in February The Daily reported that she told a friend she was expecting a girl.

Her name advice? Don’t ask other people their opinion on the name you have chosen. Her mom, she says, came up with nicknames that would have never occurred to her, which got her thinking. It also lead to a couple of potential names being taken off the list based on her mother’s thoughts.

Like many other celebrities, Ivanka believes that she will be back at work very soon after the baby arrives. She told Marilyn that she actually booked a meeting for a week after her due date thinking that she would be back that quickly.  It wasn’t until she spoke with some of her friends who were parents that she decided to ‘play it by ear.’

If you’ve never had a baby you don’t understand the pull they have on your heart strings.  I predict that she takes a couple months off and then sets up a nursery in her office.

Ivanka really is very charming and she looks fabulous for someone who only has 2 months to go.  To watch the full interview visit Marilyn.ca