Home » An Uncertain Future for Baby Brody Born Without Skin 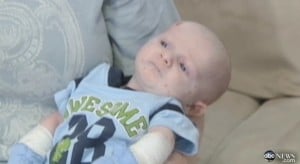 Tiny  Brody Curtis’ smile is one of the only areas of his body that you can see amongst the thick bandages that cover the lower half of his legs and arms, his hands, his feet, and his head. His parents spend about an hour a day changing his bandages and applying salve to what skin he does have to prevent infection that could threaten his life.

Epidermolysis bullosa, EB, is a condition is a skin disorder in which the affected is born with little to no skin. It can cause blisters that can occur after exposure to heat, scratching, rubbing, or after only minor injuries to the skin. Blisters can also occur inside the mouth, on the tongue, or even in the esophagus. This condition affects approximately 1 in 20,000 children. There are reportedly about 30,000 cases in the United States and half a million cases in the world. 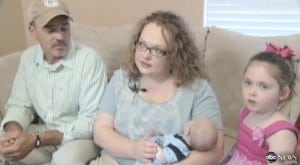 Brody has a recessive dystrophic form of this disease. His parents, Heather and Chuck Curtis, are carriers of the disease. And, while there is testing available for parents that are considered high risk, the Curtis family was unaware that they were at risk. Their daughter, Mckenna, now 5, is disease free and neither of Brody’s parents have any symptoms of the disease they passed along to their son. Heather had experienced an uncomplicated pregnancy and was carrying, what they thought was a healthy 6 pound, 13 ounce baby boy.

Even while watching Brody being born, Brody’s father was unaware that anything was wrong. The delivery doctor, however, knew something was wrong right away. They noticed skin missing from Brody’s arms, head, and legs. Instead of laying Brody on his mother’s chest after being born, they whisked him straight over to the warmer. He was then flown to a children’s hospital in Kentucky where he was officially diagnosed. It was here that Brody spent his first 27 days.

Doctors don’t know what little Brody’s future will hold. They hope that his skin will grow back and that he will someday be able to live a normal life. “But we just don’t know,” says his mother. “Some people go on to be blind or have deformities in their bodies.” And, according to doctors, she is exactly right.

Chair of the department of dermatology and cutaneous biology at Thomas Jefferson University in Philadelphia, Dr. Jouni Uitto, said “EB group disorders are tremendously variable in their severity. In the most severe forms, children can die in a couple of days or weeks after birth. The skin is not functioning or they have infections and eventually develop malnutrition and some form aggressive squamous cell cancer.”

While there is no real effective treatment for the condition, bone marrow transfers and fibroplast injections are being developed to treat the condition. But, for now, only bandages to help minimize trauma and infections are available. However, there is a little hope for little Brody.

Brody will soon go to Cincinnati Children’s Hospital for further testing. They have a special EB clinic that he will be seen at. And, according to Brody’s parents, “He’s gotten a lot better. All of his appendages are healed pretty good, except for his left leg. The skin is growing back and scabs over and is not like an open wound anymore.” The parents are hopeful but also understand what they are up against. “We hope he’ll be one of the lucky ones and still be active and play sports and grow up to be a normal kid.”