At first glance, Kaleena Pysher’s story might sound like the story of any other teen that suddenly discovers she’s pregnant. But this young lady, who chose to give her baby up for adoption because she wanted her daughter to “have the best,” isn’t even close to typical or ordinary. The very same holds true for her story, or, more accurately, the decisions she’s made.

Kaleena was 18-years-old, just months from her high school graduation, when a routine appointment with her doctor revealed she was pregnant. She was so shocked by the news that it took two more home pregnancy tests for the news to finally sink in. But when it did, she knew she had some very difficult decisions to make. 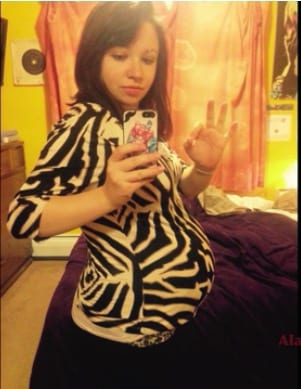 Adoption was one of them—one that she immediately knew was the right one.

“I thought, ‘Okay, what are my options?’” Kaleena told Alaska Dispatch News.

Having a sister that had given birth at the age of 14, she knew what it meant to be a teenage mother. She wanted to give her baby, and herself, a chance at something better.

She didn’t want to rely on her parents to raise her baby, and she didn’t want to go on welfare. And, at 19, she felt like she didn’t have the life experiences necessary to raise a baby. Add in her scholarship to go to UAA to become a dental hygienist, and it was clear that she was making the right decision.

But there was still the process of making sure she found the perfect family. An adoption agency she’d contacted had told her to wait until she was seven months pregnant to start interviewing prospective parents. To Kaleena, a few months just didn’t seem long enough to make such an important decision. So, instead, she looked to family.

Kaleena ended up finding the adoptive family in a family friend, a woman that had babysat Kaleena when she was younger. That friend and her partner were looking to adopt, and they seemed like the perfect choice.

And so, with the family chosen, and an open adoption plan that would allow Kaleena to stay in contact with her daughter, all that was left to do was wait. Kaleena spent those days going to her appointments, singing in the car and reading books to the baby girl growing inside of her, and feeling her kick.

“I bonded with her,” Kaleena said.

And then, nine days before her due date, Kaleena gave birth to a beautiful, healthy baby girl.

“As soon as she came out, they plopped her on my chest,” she said. “She was crying. I was just so happy.”

For the next 48 hours, she held her baby. She chose her middle name, Brooke. All the while, she prepared to give her baby over to the adoptive parents that would soon be arriving. And when they did, she handed her daughter over and never held her again.

“I wanted my daughter to bond with them,” she said. “They are going to be raising her.” 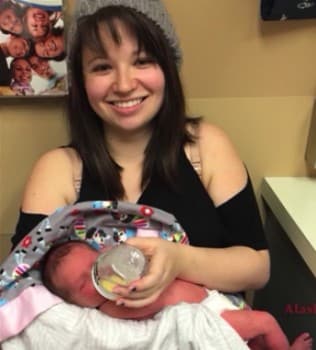 She also hoped to try and protect her heart a little.

“So it wouldn’t be life-shattering when they left the state,” she said.

But she hadn’t been fully prepared for just how painful her decision would be. How much the silence would hurt.

“I was not wanting to grieve for that loss,” Kaleena said. “I basically swept all of my feelings under the rug.”

But, when it gets too hard, she just reminds herself of the reasons she made the decision in the first place. And she sees a therapist once a week, which she says helps.

“I know in my heart and my mind that this is the best thing,” she said.

And she does have at least a little bit of a distraction . . . actually, a distraction that, at one point, had pretty much taken over her life. And it was one that very few girls her age would have thought of.

During her pregnancy, Kaleen received a visit from a nurse from the Southcentral Foundation’s Nutaqsivik Nurse-Family Partnership talked to her about breastfeeding and the antibodies and brain growth her daughter could receive.

Kaleena had a new mission, and instead of doing typical 19-year-old things, she sat at home, pumping breast milk, day after day, night after night. The late night hours of pumping every couple of hours were filled with watching TV shows on Netflix. Her days were filled with moments of pushing past the pain of cracked, scabbed, bleeding nipples. 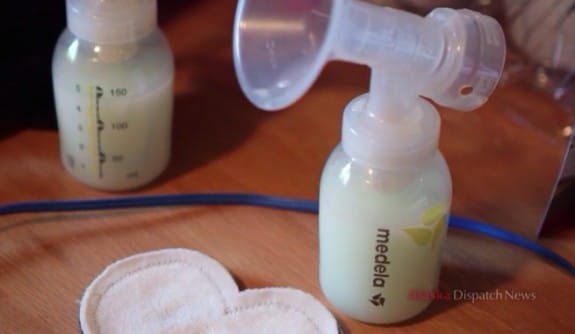 “I just sucked it up and kept going,” she said.

She sent the first bit of breast milk home with the family when they left two weeks after her daughter’s birth. The rest, she’s been sending in boxes marked “Fresh Seafood—Keep Refrigerated” to ensure that it stays frozen. One box ended up weighing 80 pounds, and she’s pumped so much that the adoptive parents had to buy a whole extra chest freezer. In fact, Kaleena still has milk stored in her parents’ freezer with the summer’s catch of salmon. That milk will go to a milk bank in Colorado to be screened and hopefully fed to preemie infants in neonatal intensive care units. 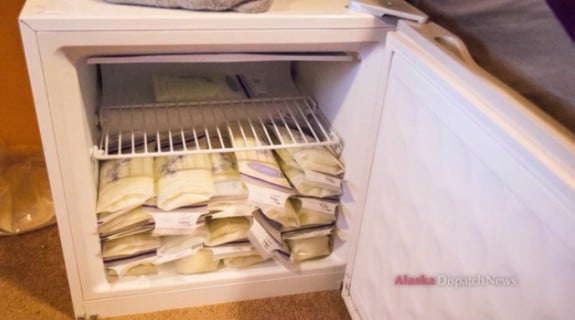 Kaleena knows that it’s time to stop, and has dropped down to pumping only twice a day. But the role has been hard to let go of, she says.

“As long as I’m still giving them breast milk, they still need me for something. [The baby] still needs me,” she said. “But now that I’m tapering off, I feel like they’re not going to need me anymore.”

In fact, her deepest fear is that, once the relinquishment papers are signed, the adoptive parents will drop her completely. They assure her that this isn’t going to be the case, that there will be birthday visits, video chats on the phone, pictures, and the opportunity to send Christmas gifts.

Honestly, it’s a lot for a 19-year-old to cope with, but Kaleena says, despite the heartache and difficulties, she wouldn’t trade her experience for anything.