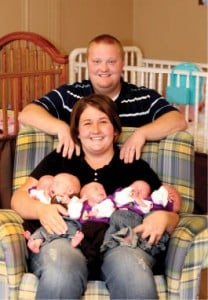 Last year we introduced you to a Jeffersonville couple, Christy Kessinger and Bill Clark. The couple who, at the time, had three children, had been surprised by the results of their prenatal ultrasound.  Then they were surprised again…and again…and again.

At the first screening, the couple was told to expect twins.  But two weeks after that, a subsequent screening showed another heartbeat.

Christy was hospitalised from the 20th week until the babies were born eight weeks later.  The quints spent a further 6 weeks at Kosair Children’s Hospital, but were all home by the end of September.

Fast forward to the present and the family of 10 is struggling to maintain sanity in a, too small, three bedroom ranch house.

The couple’s third child, Tanner, who has Down’s syndrome, sleeps in a converted walk-in closet in his parent’s room.  He started out in the closet because of a series of serious illnesses when he was younger.  His parents felt more comfortable having him close by, so they could monitor him.  Now that he’s well, however, “there’s really nowhere else for him to go,” Kessinger said.

What used to be the garage was renovated to become a family room and is now the nursery.  The walls are lined with cribs and swings; five bouncers, five Bumbos, five of everything.

The house is on the market, but it isn’t an easy sell in a sluggish economy.

“The thought of selling our home scares me just as much as not selling it,” said Christy  “We need at least five bedrooms, and that’s with four girls sharing one room.”

“Two bathrooms is not going to work, and we need two washers and dryers and maybe two dishwashers,” adding, “And what five-bedroom house is under $175,000?”

The couple recently bought a second-hand 12-seater van, so the family can continue to live as normal a life as possible.

“Our older kids are so used to doing things and going places that we will not stop,”

The couple doesn’t want the older three to grow to resent the babies, so they don’t call on them for help very often.  They don’t get a great deal of help at all, really.  Clark’s mother is battling cancer.  Kessinger’s parents live nearly an hour away but do what they can.  The couple has friends who come by twice a week, to lend a hand.  They appreciate the help they get, but for the most part, they’re on their own.

It is a struggle for the family, but they won’t throw in the towel.  “God blessed us with these children,” Kessinger said confidently.  “We know everything will work out.” – Jen R, Staff Writer