Home » Angelina Jolie Shops For Costumes With Her Kids

It is likely quite a chore to find costumes for 6 kids. But it appears that Angelina Jolie wants to make sure her crew gets the ones they want. The actress was photographed out yesterday with her three biological children Shiloh, Knox and Vivienne shopping for Halloween Costumes at the Halloween Super Store in Sherman Oaks, California. 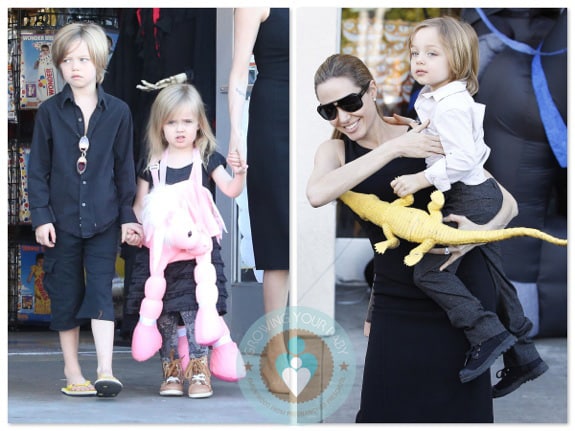 While accompanied by a team of security, the actress appeared to get the job done emerging with her kids and a lot of bags filled with costumes and props.

An actress with her star power would probably be able to have any costume made through the props department at one of the studios she works with.  But in this case her kids seemed to be quite happy with the grocery store variety.  In fact, Vivienne wore her pink unicorn costume to the truck, while Knox carried a stuffed alligator. 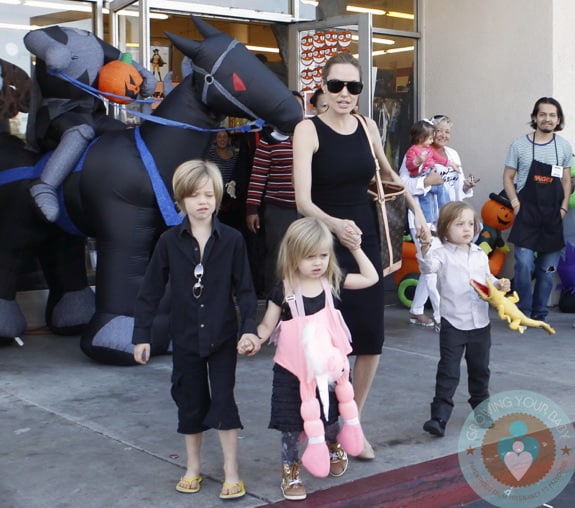 This Summer it was announced that Vivienne had landed a speaking role as baby Aurora in Disney’s Maleficent along side her mom.

Last week US Magazine reported that Pax, 8, and Zahara, 7, will also appear in the fantasy flick but won’t speak.

“They have smaller parts,” a source told the Magazine. “Shiloh was supposed to be in it, too, but she was bored and not in the mood during the day her part was supposed to happen, so she ended up not being in the film.”

The film, however, will not be in theaters until March 2014 so fans will have quite a wait to see the Jolie-Pitt family’s big screen debut.