Home » Angelina Jolie Touches Down in Sydney With Her Crew!

Angelina Jolie had her hands full when she arrived at Sydney airport on Thursday afternoon. The actress was accompanied by security and her six children; Maddox, Pax, Zahara, Shiloh, Knox and Vivienne. 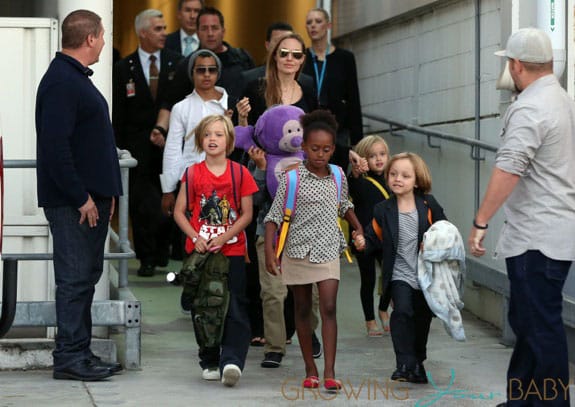 It has been a while since we have seen the whole crew together. Angelina and Brad(Pitt) tend to do trips with just 2 or 3 of their children at a time.  And we can see why.  There was a lot of people with the actress as she made her way to the car. Getting six kids to all be where they’re supposed to be is likely a complicated process.

To help, Zahara held Knox’s hand, while Vivienne stayed close to her mom.  Five of the children could be seen, with the exception of Pax.  He held his purple teddy bear over his face as they came out of the airport, but posed for the camera as his mom was getting into the vehicle. 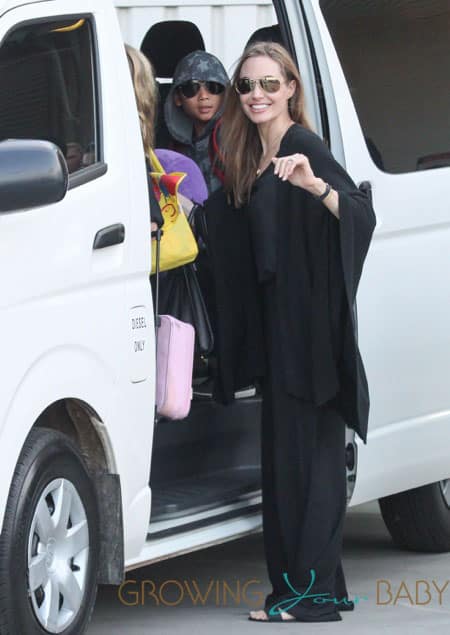 The family will live in Australia for the next three months while Angelina directs her new World War II drama Unbroken.  Her partner Brad Pitt wasn’t along for the trip.  He stayed back to film Fury with Shia LaBeouf. The pair have been photographed over the last couple days doing some training at Fort Irwin scorching Mojave Desert.