Home » Angie Everhart Is Ready To Be A Mom 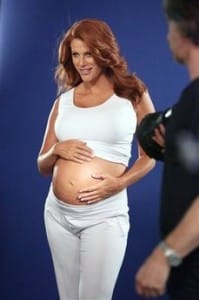 Even though Angie Everhart isn’t due for another week she is completely prepared and ready to meet her first-born, a boy.

“The nursery is done, the name is picked and I’ve even got a year’s supply of Seventh Generation diapers.”The actress-model, who is the new face for Palmer’s Cocoa Butter Formula stretch mark products, reveals she’s naming her son Kayden Bobby Everhart. “Kay is my mom and my middle name, and Bobby is my dad’s name,” explains Everhart.

This past weekend, the final touches were placed on Kayden’s “safari rock n’ roll” nursery,” which includes a mural featuring a giraffe wearing headphones and a monkey playing a Van Halen guitar. “I was never one for pastels,” Everhart says with a laugh.

The mom-to-be, 39, has experienced an easy pregnancy devoid of nausea or complications. Her biggest craving? “My first trimester, I could’ve killed someone for an egg salad,” she says. “I ate so much egg salad, I don’t think I’ll ever be able to look at it again for the rest of my life.”

Due to a previous back surgery, she will deliver via scheduled C-section. “Would I have preferred to deliver naturally? Of course,” she says. “But it’s not an option for me.” 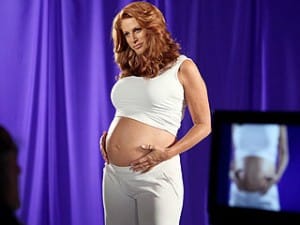 Finding out she was pregnant was “a welcome surprise.” Describing the father as a close friend but declining to reveal anything further, Everhart says she plans to raise her son as a single parent. “I’m not nervous,” she says. “The only time I got shaky was when my girlfriends gave me a stroller and I’m standing behind it thinking, ‘There’ll soon be a human in there that’s coming out of me!’ ”

As for getting back into model shape, “I’m not too worried,” says Everhart, whose national print and TV campaign for Palmer’s Cocoa Butter pregnancy products will premiere this fall and winter. “I’ll have a child and my two puppies to take care of. I think I’ll have my hands full.”