Home » Another Study Disproves Link between Vaccines and Autism

For those of us dealing with autism, each and every day, it would be nice to have someone or something to blame. Because the reality is, parents of children with autism often go through a phase in which they blame themselves – we consider everything we’ve done, from the date of conception and beyond, and wonder if by some possible way, we could have prevented the developmental struggle that limits our child. So it’s easy to see why the link between vaccines and autism exist. 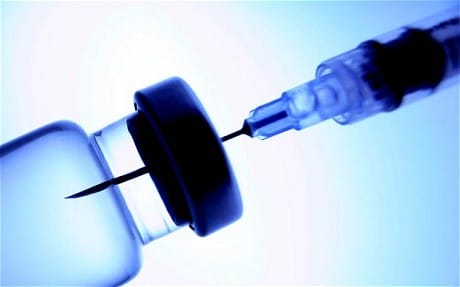 But there’s a cold hard truth behind the autism-vaccine link, and it’s one that some parents may not be aware of.

The rumored connection all started with the British Surgeon and medical researcher Andrew Wakefield and his colleagues. In 1990, they published a study in The Lancet, claiming that they had found a connection between the measles, mumps, and rubella (MMR) vaccine and autism. But after countless studies, and a more thorough examination of Wakefield’s study, no such link has been found or duplicated.

“Who perpetuated this fraud? There is no doubt that it was Wakefield. Is it possible that he was wrong, but not dishonest: that he was so incompetent that he was unable to fairly describe the project, or to report even one of the 12 children’s cases accurately? No. A great deal of thought and effort must have gone into drafting the paper to achieve the results he wanted,” British Medical Journal Editor-in-Chief Fiona Godlee, Deputy Editor Jane Smith, and Associate Editor Harvey Marcovitch wrote in a recent study that again analyzed the link between vaccines and autism.

The ethics committee came to this same conclusion back in May of 2010, and Wakefield was barred from practicing medicine in the UK. He was also taken off the Medical Register, and his final research paper was pulled from the Lancet. In short, he was said to have “failed his responsibilities as a consultant and was dishonest and irresponsible to approve and edit the final research paper.”

Unfortunately, that hasn’t stopped his research from spreading like wildfire, especially among those that are adamant against vaccinating their children. For some, that decision is based out of fear. For others, it is simply misinformation, which, according to co-author Margaret Maglione, a researcher with Rand, says there is a lot of.

“With the rise of Internet and the decline of print journalism, anyone can put anything on the Internet,” Maglione told Medical Daily.

And that misinformation has compromised the health of thousands of children, cost billions in medical care, and continues to threaten the health and well-being of people all across the United States. In fact, vaccines to infants and young children over the past 20 years has prevented 322 million illnesses, 21 million hospitalizations, and 732,000 deaths, according to the CDC – but still at least 539 people in the United States contracted the measles, this year alone.

“Concerns about vaccine safety have led some parents to decline recommended vaccination of their children, leading to the resurgence of diseases,” study co-author, Dr. Courtney Gidengil, pediatrician at Rand and Boston Children’s Hospital, and colleagues wrote in their report. “This report should give parents some reassurance.”

“The most dangerous aspect of giving young children vaccines is driving to the office to get them,” pediatrician Paul Offit, chief of infectious diseases at Children’s Hospital of Philadelphia and developer of the RotaTequ vaccine, told Medical Daily.

But if vaccines aren’t the cause of autism, what is?

There are many theories, none of which have been fully proven. However, most of the possible causes point to culprits that cause brain abnormalities in the brain structure or function during pregnancy or during the early developmental stages of childhood.

Some of the theories that have the strongest evidence found that:

Environmental exposures, like prenatal pesticide exposure could be a cause. In fact, women who lived on a farm or near open fields where pesticides are readily used during their third trimester of pregnancy were found to have a 60 percent higher chance of giving birth to a child with autism.

Age of mothers during pregnancy was also found to be a factor. Those that are age 40 are older have been found to have a 50 percent greater risk of having a child with autism than those in their 20’s, the National Autism Association says.

Pharmaceutical exposure to babies in utero may be yet another cause. Those that are of most concern include SSRIs, valporic acid, and thalidomide.