Home » Another Toddler Becomes Trapped Inside A Vending Machine

For what seems like the thousandth time, a toddler had to be rescued from one of this ‘claw’ toy vending machines. 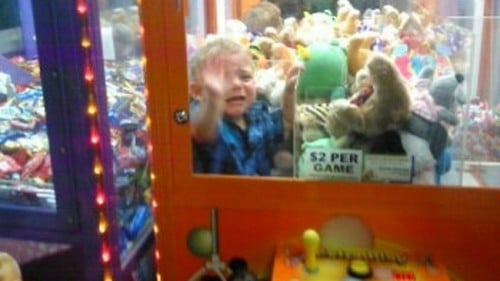 Emergency crews were called to an Australian Hotel after a curious 15-month-old boy climbed into the machine’s prize slot opening.

Before they arrived the manager used his keys to free the boy.

Thankfully the toddler did not sustain any injuries during the incident and only became a bit of an attraction to hotel patrons, who photographed him in the machine.

Apart from some tears, he was checked over and didn’t require any treatment.

It is not the first time a curious child has been trapped in the tempting toy vending machines.  There seems to be a design flaw in them that didn’t take into account how clever a toddler can be when they want something they can’t have.