I just don’t understand these women who don’t know they are pregnant until the “indigestion” turns out to be labour. If you have not had your period for 6 months and your belly is getting bigger…you might be pregnant. What is the deal here? 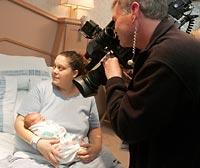 Amanda Brisendine attributed the 30 pounds she gained in the past year to an abandoned smoking habit and rich food. So when she went to the hospital with sharp stomach pain, she wasn’t expecting to leave with a newborn son.

“I don’t know how I didn’t know. I just didn’t know,” Brisendine said Tuesday from her bed at Overlake Medical Center’s Birthing Center, where she delivered Alexander Joseph Britt by Caesarean section.

Doctors agree her case is not rare.

George Macones, chairman of the OB/GYN department at Washington University in St. Louis, said he’s seen about a dozen cases in his nearly 20-year career.

The pregnancy isn’t always obvious when a woman is overweight, or a woman will have spotting or bleeding during the pregnancy and mistake it for menstruation, said Macones, who specializes in high-risk pregnancies.

The 26-year-old Renton woman went to Group Health Cooperative’s Eastside campus last Saturday after experiencing several days of abdominal pain so intense that she called in sick from work.

Doctors examined her and performed a pregnancy test that showed positive — she was nine months pregnant.

“I was so shocked. I was nauseous,” said Brisendine, whose boyfriend Jason Britt didn’t believe her at first.

Already mother to a 14-month-old daughter, Melodies, Brisendine said she didn’t experience typical pregnancy symptoms, like a missed menstruation, morning sickness, fatigue or food cravings. “Everything was normal as far as I knew,” she said.

“From our assessment, the baby wasn’t doing well in utero,” Bloomquist said. “He needed to come out.”

“We’re in for a really, really big adventure,” Brisendine said.