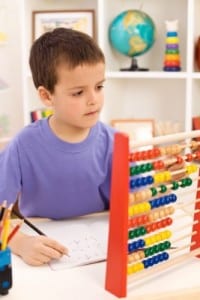 The classic fear of math is not because of the inability to understand the mathematical problems, but fear of fear itself it seems. According to a study conducted by the Stanford University School of Medicine children who have difficulty with math display an altered brain function due to anxiety.

The study published in Psychological Science showed that second and third grade children who were fearful of numbers showed brain activity that is associated with panic and fear and it was this brain function that decreased the activity of that part of the brain that helped with math problems. Thus it is the fear that decreases the brain’s capacity to solve the math problem.

The research sees the fear of math in a new light and shows that children who find it difficult to solve mathematical problems can be counseled to overcome their fear first, which might help them be at ease with math.

Lead author Vinod Menon, PhD, the Stanford professor of psychiatry and behavioral sciences said, “The same part of the brain that responds to fearful situations, such as seeing a spider or snake, also shows a heightened response in children with high math anxiety.”

The team used functional magnetic resonance imaging brain scans with 50 students who had shown low and high levels of anxiety towards mathematics. The children were also assessed for math anxiety with a modified version of a standardized questionnaire for adults, and also received standard intelligence and cognitive tests.

The children were divided into two groups where one had low anxiety and were therefore good in math, and the other had high anxiety and found math difficult. The team found that children with high math anxiety were less accurate and significantly slower at solving math problems. This was because their math-specific fear, jammed the brain’s information-processing capacity along with the ability to reason through a math problem.

The researcher said that this might be an evolutionary phenomenon. When the brain fears something it automatically becomes intuitive and takes spontaneous actions rather than in the logical and mathematical way. Therefore those who fear maths also have lesser of the mathematical activity needed to solve the problem at that moment.

Menon added that although the phenomenon of math anxiety has been known for a long time, no one really tried to study the base behind the fears.

“It’s remarkable that, although the phenomena was first identified over 50 years back, nobody had bothered to ask how math anxiety manifests itself in terms of neural activity … You cannot just wish it away as something that’s unreal. Our findings validate math anxiety as a genuine type of stimulus- and situation-specific anxiety,” remarked the researcher.

The researchers found that the fear of maths was actually similar to other phobias like fear of spiders or fear of heights. Menon added that even for a person who is good in maths, the anxiety may arise and block their skills while solving a number problem.

He said that the same technique could be used to assess other issues that children and adults have difficulty dealing with.

Victor Carrion, MD, a pediatric psychiatrist at Lucile Packard Children’s Hospital and an expert on the effects of anxiety in children commented about the research,

“The results are a significant step toward our understanding of brain function during math anxiety and will influence development of new academic interventions.”

Menon feels that the research has wider possibilities. It an help develop treatments for math anxiety and further research can be done to find the trajectory of math anxiety from early childhood throughout school. He also said this study could lead to other studies to know how the brain’s information-processing capacity is affected by performance anxiety in general.

Finally, for parents who have been struggling to make their children good in math, it might be a good idea to conquer their fears first. Numbers might just sink in better if the brain is calm and happy.