Apple Inc. is apologizing for allowing a 99-cent iPhone game called “Baby Shaker” that let a player quiet a virtual crying infant by shaking the device. 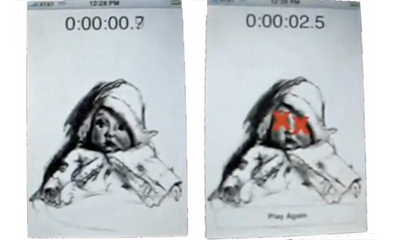 The game featured black-and-white line drawings of a baby as well as the following description:

“See how long you can endure his or her adorable cries before you just have to find a way to quiet the baby down!” the Associated Press reports. Once the player finishes shaking the device, the on-screen baby is depicted with large red X’s over its eyes.

Apple removed the program from the iPhone’s App Store on Wednesday, but only apologized after critics pressed for it yesterday.

Apple spokeswoman Natalie Kerris said Thursday that the game was “deeply offensive” and said it should not have been approved for sale.

“We sincerely apologize for this mistake,” Kerris said in a statement.

The game developer, Sikalosoft, commented just before their website was taken down saying,

“Okay, so maybe the Baby Shaker iPhone app was a bad idea. You should never shake a baby! Even on an Apple iPhone Baby Shaking application. No babies were harmed in the making of Baby Shaker.”

Maybe if they saw the effects of a real baby that has been shaken this would have never been an issue. Some live, but never fully recover, causing them to need full time care.

These people should be ashamed of themselves!